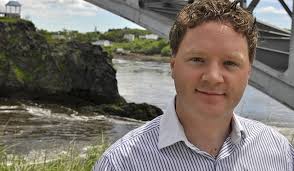 In about a year, the co-founders of NB Biomatrix hope their company will have a plant in Saint John producing a solution that can help to clean heavy metals from the most contaminated water sites around the world.

CEO Jeff Jennings and chief science officer Keith Brunt are now planning to open a test facility in Fredericton early in 2017 to demonstrate the commercial production of Naqua-Pure, their main product.

If all goes according to plan, they will then open their commercial production plant in Saint John in the summer of 2017. And then they hope to help clean up environmental disasters around the world.

Naqua-Pure is a liquid that uses nanotechnology to remove heavy metals and other pollutants from waste water. The product binds with water-soluble particles such as heavy metals and non-soluble components such as oil. It then uses electromagnetic forces to remove the material from water.

“When you think about pollution, it’s pretty simple: it’s something you don’t want mixed in with something you want,” said Brunt during a presentation at the recent Atlantic Venture Forum. What NB Biomatrix aims to do, he said, is to remove heavy metals — the hardest contaminant to remove from water — more quickly and easily than other methods, and do so without harmful residues.

Obviously the pain NB Biomatrix is addressing is profound. Brunt said there are now 87 major water sites in the world that would take 35 years to clean up at a cost of $250 billion. What’s more, as the world’s population grows, so do the number of severely-contaminated sites.

And he added that even cleaning up the sites can produce residual problems as the waste removed from the water is usually a pollutant that has to be disposed of.

Industries now spend about $700 million a year trying to get rid of heavy metals. NB Biomatrix has a solution it says can clean contaminated sites better.

“We can actually decrease those heavy metals by 90 per cent within 10 minutes,” said Brunt, who works as an assistant professor at Dalhousie University’s medicine program in Saint John. “It’s safe, bio-degradable and easily deployed.”

Naqua-Pure increases the density and allows for the drying of post-treatment wastewater sludge — so much so that it can be used in bio- or plasma-based reactors for energy generation. The leftover heavy metals become what is known as “ultra dense”, which means they are removed from the environment forever.

The company is only two years old and has already done well in two different startup competitions.

In its first year, it won the BioInnovation Challenge, the $35,000 competition for life sciences companies in the Maritimes. Then last year it placed second in the New Brunswick Innovation Foundation’s Breakthru competition, taking home $222,250 in cash and services.

Now NB BioMatrix, which has a staff of four and is growing, is raising money from private investors with a target of $425,000. It received a commitment of $150,000 in mid-June.