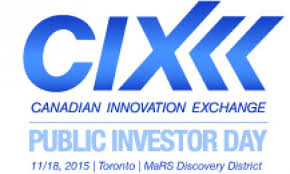 The CIX website says the selected companies are “the hottest, most innovative Canadian technology companies selected by a selection committee of investors and professionals in the finance and technology industries.”

The 20 companies will present their products at CIX 2015 on November 17 at the MaRS facility in Toronto.

It was the most entries that the region has ever sent to the CIX. Since 2008, the only Atlantic Canadian companies that have made the list have been ClearRisk of St. John’s in 2011; Celtx of St. Johns and LiveLenz of Halifax in 2012; and SmartSkin Technologies of Fredericton in 2013. Atlantic Canada was shut out last year.

SkySquirrel, also of Halifax, has developed a drone-based product that can help farmers and vineyard owners improve growing conditions.

RtTech of Moncton has produced state-of-the-art automation software that helps industrial companies improve manufacturing processes. The company on Wednesday night received the Atlantic Canadian Startup Canada Award for Innovation, and in May was named the BDC Innovation Award winner for 2015.