With the help of Lab2Market, Archaeosoft is building software to help archaeologists keep digital records. 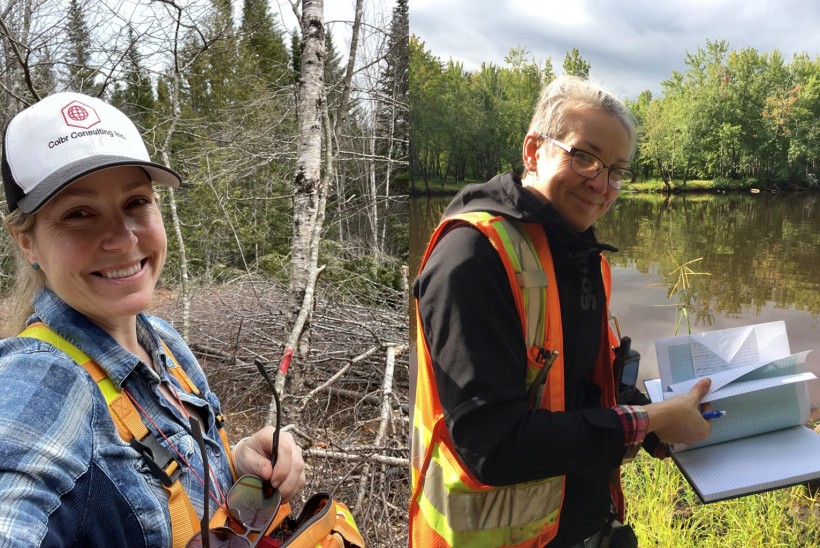 When archaeologist Cora Woolsey conceived of the idea for a software platform that would help her peers gather and log data about their work, she drew inspiration not from her own field, but from the world of public health.

Woolsey holds a PhD in archaeology from Hamilton, Ontario’s McMaster University, which she earned in 2018. But she decided to start work on Archaeosoft, her startup, while she was working as a post-doc researcher at the University of New Brunswick’s Faculty of Nursing.

With job opportunities thin on the ground for archaeologists in Atlantic Canada, she had been forced to take work outside her field. But the relatively high-tech world of healthcare inspired her to work on modernizing archaeology.

“What we studied was passive remote monitoring technology, and also this mobile technology for use in long-term care homes,” she said. “And both of these are meant to ease the burden on people, so that the people who need the care, it can be more people-to-people, instead of people trying to regulate other people.

“I just started to think, at that point, about how technology could really solve a lot of problems in archaeology as well.”

With an idea in mind, she began reaching out to investors, one of whom, Chelsea Colwell-Pasch, went on to become her business partner.

Colwell-Pasch is a private sector archaeologist who owns Fredericton-based Colbr Consulting. Her company runs the archaeological portions of environmental assessments for construction and industrial projects, ensuring that proposed developments do not harm previously undiscovered archeological sites.

She said in an interview that her interest in the project was inspired by her struggles with her workload at Colbr. She has spent about 120 days in hotels so far this year. But it is when she is at home that the reams of paperwork her digs generate most frustrate her, cutting into time with her two young children.

“For every hour we’re in the field, there’s an additional amount of time outside of the field,” she said in an interview. “Every photo you take, you must write a photo log, or caption.

“Context is the number one thing in archaeology. The amount of time at hotels is not so bad, but if I’m at a job where I’m close to home, I have no time when I get home to see my children and still do field data collation. I have to choose between one or the other.”

With the help of the Lab2Market accelerator offered by Dal Innovates -- one of Dalhousie University's entrepreneurship hubs -- Woolsey and Colwell-Pasch’s company is working on developing a software platform, called STRATUM, to digitize and partly automate the note-taking and record-keeping processes for archeological digs.

Archeological digs require meticulous record-keeping, not least because they often involve Aboriginal artifacts that carry weighty cultural significance. The industry still relies heavily on paper records, cataloging a painstaking excavation process that the founders describe as being like a game of Battleship, but with a peg in every hole.

The two officially founded Archaeosoft in April of this year, along with Sara Beanlands and Steve Garcin, the co-founders of another private sector archaeology firm, Boreas Heritage Consulting.

By then, Woolsey and another collaborator, UNB Faculty of Computer Science professor Scott Bateman, were already working their way through Lab2Market. They spent most of the eight-week program, which heavily emphasizes product-market fit, conducting customer discovery.

Colwell-Pasch said the market research included in-depth talks with First Nations groups, whose historical communities are the subjects of most archeological research in Canada, with Lab2Market helping the team plan and structure their discussions.

“We all realized the opportunity we had with this software to make such a positive impact for our discipline and for Indigenous rights holders,” she said. “It became kind of a parallel target, besides the (business and software) development, to ensure that we included them as early as is humanly possible.

“The new (way of doing) archaeology is the people determine the archaeology, as opposed to it being kind of projected on them, what was important to their culture and their heritage.”

After graduating from Lab2Market, Woolsey and Colwell-Pasch began directing their efforts towards building the STRATUM platform in June, hiring a freelance software engineer to work on the project.

They enrolled in a second Dal Innovates program, the three-month Ready2Launch incubator, which helps researchers pursue commercialization of their work after Lab2Market has helped them establish that a customer base exists.

But in an unusual twist, the Archaeosoft business proved to be moving too fast for the team to fully dedicate themselves to Ready2Launch. As the demands of technology development and talks with customers began to interfere with their ability to properly focus on the incubator program, Woolsey and Colwell-Pasch decided to drop out and focus on scaling the business on their own.

“Our entire product really rested on (technology) development,” said Colwell-Pasch. “And I was finding that I had to make sure that I was really involved, because as the industry expert, I had to pretty much be ready to answer (the software team’s) questions all the time.”

Archaeosoft has been bootstrapped so far, but Woolsey said they are now eyeing a seed round as soon as STRATUM is ready for commercialization. In the meantime, they have inked a deal with the New Brunswick government to develop and test the software.

As well as the co-founders, Archaeosoft’s team now includes an additional four people. Jim Trussler, who was an exec with Halifax medtech startup Emagix, is acting as COO. Wendy Vrooman, CEO of sales consultancy Arc Ingites, is heading up the business’s sales efforts. Jeff Mundee, a co-founder and head of design at Fredericton’s Reframe Games is serving as technical lead. And Nashwaak Watershed Association project co-ordinator Natalie Deseta is acting as Archaeosoft’s mapping specialist, as well as working on grant applications.

Woolsey said she expects to field test STRATUM over the rest of 2021 and part of 2022, with an eye towards making it commercialization-ready in about a year.

“I think we've done pretty well so far without having to go and hold our hands out to anybody,” said Woolsey. “But pretty soon here… we're going to have a minimum viable product that's going to prove to people that it can be built, it can be amazing.

“And so once we have that, I'm going to feel pretty strong about looking for more investors… I just kind of want to wait for the right time. I really want to be in a position of strength when we do that.”

The Lab2Market Program is a 16-week program to help researchers validate their ideas with the purpose of finding business/commercial value. The program is delivered by Dal Innovates and based on similar programs that have found success in other parts of the world, but with a Canadian twist.

Check out our previous articles about Lab2Market participants: