Ofoe taps the L2M program to bring an organic fertilizer to market. 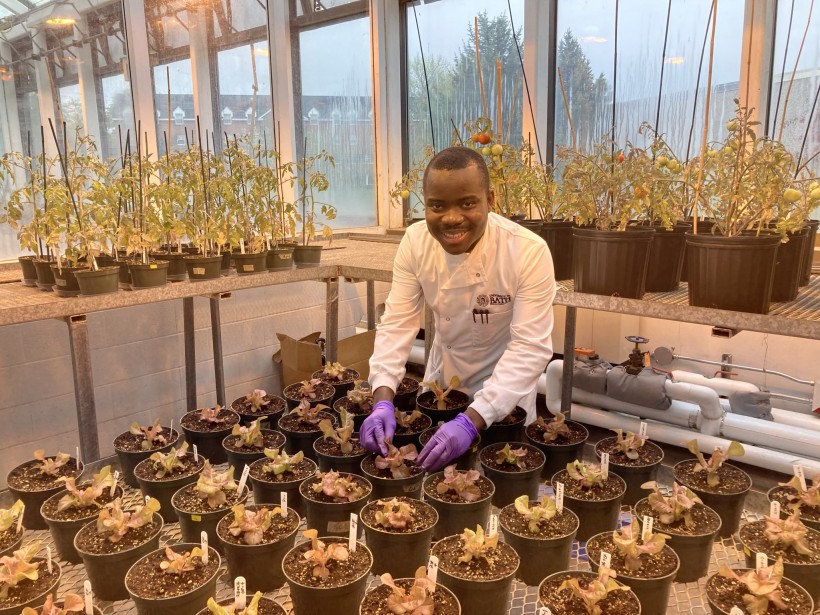 For Dalhousie PhD student Raphael Ofoe, participating in Dal Innovate’s Lab2Market program was not just a path to creating a viable business, it was a way to accelerate his work on solving one of the most pressing challenges facing both his home country of Ghana and the rest of the world.

Ofoe is a PhD candidate in Dalhousie’s agricultural science program. Last fall, he was the entrepreneurial lead for a Lab2Market team developing a technology to convert animal waste into nutrient-rich and environmentally friendly fertilizer. He said in an interview that his goal is to help solve the problem of crop yields failing to keep pace with the world’s growing population.

“If we don't have enough food to eat, and also feed the growing population, we’re going to turn to alternative ways of producing more food that will deplete our environment,” said Ofoe. “So, it would be very good to look at organic or sustainable ways to enhance crop growth and productivity.”

Global food demand is expected to increase as much as 59 to 98 percent by 2050, according to the scientific journal Agricultural Economics. And according to the journal PLOS ONE, crop yields are not on track to meet that need. In fact, thanks to climate change, crop yields in several key food-producing regions look set to decline.

“When growing up, I realized that in every country, agriculture has been one of the major drivers of an economy — for the progress of every economy,” he said. “And I believe that one can impact or affect the life of its citizens through agriculture.”

Ofoe’s approach to improving the global food and nutritional supply, though, differs from many of his fellow agricultural scientists.

Food scientists usually make headlines for genetically modified plants and animals, or for synthetic chemical fertilizers, herbicides and pesticides. These approaches to increasing food production, Ofoe explained, tend to increase the volume of food produced, but not its nutritional content. Many fruits and vegetables, for example, have been genetically modified to be larger without necessarily having increased nutrients.

“I believe that the synthetic chemicals don't really enhance the nutritional content of food, but rather, could potentially just increase growth and have a detrimental effect on the environment,” he said.

Instead, Ofoe is interested in research that is focused on enhancing plant growth and nutritional content by enhancing bioactive compounds that interact with plants at the cellular level — a more precise and highly technical approach than the industry standard.

He tasked Ofoe with reaching out to animal farmers to ask for access to their waste, so that the lab could have material with which to develop its process.

A series of experiments, in which the processed fertilizer was given to young plants, was enough to prove the viability of the concept, although the early stage of the research meant that the team didn’t yet take the time to let the plants grow to maturity.

The project was a first for Ofoe. His past research at the University of Bath had all been firmly planted in the academic realm. Often, he said, agtech companies will hire universities to conduct research and development, but the university staff usually do not participate in the commercialization of their work.

So, the three men needed help turning their research into a product they could sell. For that, they turned to Dal Innovate’s Lab2Market accelerator, which specializes in helping academics use their research to create profitable businesses. To prepare, the trio worked through the summer of 2020 refining their production process.

As the Entrepreneurial Lead, Ofoe was their point-person, and in October, they began Lab2Market’s eight-week crash course. It walked them through the process of customer discovery and product development, and helped them navigate the worlds of government regulators and intellectual property protection.

At the core of their Lab2Market training, Ofoe said, was the guidance the trio received in actively contacting potential customers and learning about their needs and pain points.

“You need to first of all do customer discovery, to know what problems they are facing, see how many people may want your product, and therefore is your product able to bring some kind of value proposition to solve their concern,” he said.

Almost all of the more than 100 farmers Ofoe and company reached out to in North America, for example, said any fertilizer the team developed needed to be organic. That’s because farmers cannot receive their own organic certifications unless the fertilizers they use are also accredited. A series of online polls Ofoe and his colleagues conducted also bolstered that conclusion.

“The potential for organic products is really there,” he said. “Most farmers in Canada need organic products, especially organic farmers. And not many organic companies are able to produce these kinds of biostimulants to enhance the growth and performance of crops.”

According to the Canada Organic Trade Association, the country’s organic food market is worth about $3.5 billion annually.

That realization has led Ofoe, Abbey and Khwaja to pursue an organic certification for their fertilizer.

And armed with the knowledge of exactly what product potential customers wanted to buy, the three officially decided to sell their fertilizer to farmers.

Before they can do that, though, they still need to finish the research and development process.

This summer, Ofoe and his colleagues will continue collecting animal waste from farms to refine their product. And to build on what they learned during customer discovery, they plan to begin sending farmers samples to test in their fields. The farmers will then give feedback about how the product can be improved.

Also on the agenda for this summer will be securing “certified organic” status for the new fertilizer — a labour-intensive process that requires Ofoe and his team to submit detailed information about their production techniques to one of several bodies accredited by the Canadian Food Inspection Agency.

That organic certification, Ofoe said, will be one of the last steps before his team locks in their final, production-ready formula and enters the market.

“The timeline is, by winter next year, we'll have enough information… And based on that, we can come up with our formulation,” he said. “Then, we will be ready to go.”

The Lab2Market Program is a 16-week program to help researchers validate their ideas with the purpose of finding business/commercial value. The program is delivered by Dal Innovates and based on similar programs that have found success in other parts of the world, but with a Canadian twist.

Click here to read about L2M helping to assess the market for a project that helps potato farmers.