UPEI's Arnold went through Lab2Market to assess the market for technology that optimizes water use in potato fields. 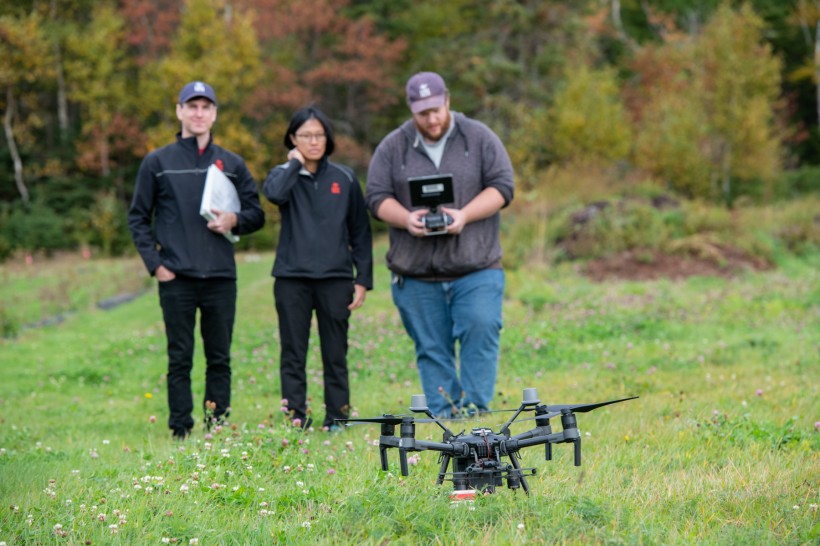 Stephanie Arnold’s path to entrepreneurship has included not just a business degree, but also a PhD program, a rotating house and Prince Edward Island’s most famous export.

The environmental sciences PhD candidate and researcher is developing irrigation management software to help potato growers know when and how much to water their crops — an increasingly thorny problem in areas with limited water supplies.

Arnold’s past experience has largely been in the world of big business, where she worked on market research, business development and supply chain management for consumer goods and chemical companies. Despite her corporate bona fides, when she began contemplating launching her own agtech business, she turned to the Lab2Market technology accelerator for help.

Lab2Market is an accelerator program meant to help university researchers find ways to commercialize their work. Led by Dalhousie University, Memorial University and Ryerson University, the program’s backers include the Canadian government, Springboard Atlantic, Mitacs, and the Ocean Startup Project.

Arnold, who attended the Lab2Market stream offered by Dalhousie, grew up in Ontario. She earned a bachelor’s degree in chemical engineering from the University of Toronto, but the limited scope of her studies rankled.

“In my third year, I realised I was learning a lot about very narrow disciplines, so I wasn’t that interested in being an engineer,” she said. “I wanted that breadth of understanding.”

Arnold’s solution was to pursue a Master of Business Administration degree. She said the broad applicability and less restrictive scope of an MBA made for an appealing contrast with her highly specialized undergraduate degree.

During the program, she worked first at Imperial Oil and then in Proctor & Gamble’s marketing department. After she graduated, she moved to the Canadian arm of German chemical multinational BASF.

At both companies, Arnold said her chemical engineering and business training created a rare conflux of product knowledge and marketing expertise that made her well suited to her work. For a time, she thought corporate marketing and business development could become her permanent landing place in the business world.

Meeting her now-husband Steve Arnold and founding a business with him changed that.

In 2013, the duo moved to Prince Edward Island, where they started Around The Sea – a hospitality business based on the novel architectural idea of a round house that would slowly rotate throughout the day, offering every room a view of the ocean off PEI’s northern coast.

Arnold and her husband bought a rotating platform from Australia and a hurricane-resistant building from North Carolina. The result was an unusual four-unit residential building that they now rent to vacationers, and occasionally, locals.

The stress of running a company at first proved off-putting for Arnold, who said the uncertainty and pressure made for an unpleasant contrast with the stability of the corporate world.

As she acclimated to the new demands posed by entrepreneurship, though, she came to love it.

“I absolutely hated entrepreneurship when I first got into it, just because it was so different and so uncomfortable,” she said. “But I've learned to work in uncertain, high-pressure situations. And now I really like the flexibility it gives me in terms of how I structure my day, particularly with two young children.”

For the first time, Arnold found herself eyeing a career as a startup founder.

When she first arrived on PEI, though, she still needed a day job. So, she signed on as a research assistant at the Island’s only university.

Her work in the University of Prince Edward Island’s Climate Research Lab rekindled her interest in scientific work, and her manager encouraged her to pursue a PhD. He became her academic supervisor and would later collaborate with her in the Lab2Market program.

Just as Arnold had straddled the worlds of chemical engineering and business as a marketer for chemical companies, now her PhD research offered a way to pursue both entrepreneurship and hard science.

Learn About the 23 Teams Accepted into the Latest Lab2Market Cohort

One research topic that she is particularly focused on is how farmers can more precisely determine how much water potato crops need, when they need it and where they need it. The question is growing more pressing as droughts and finite water resources make it harder to water crops in many farming regions.

Potato plants undergo physiological changes when they need water. In particular, their temperatures change when they experience drought stress.

That temperature change is at the core of Arnold’s research. By using drones with heat-sensors and cameras, she can detect water stress in potato plants and learn what parts of a potato field need the most water. That knowledge lets farmers consume less water by using it only where it is most beneficial.

But when Arnold decided to commercialize her work, she had a problem: her MBA and experience in the corporate world had taught her about the workings of businesses that were already operating at scale. She now needed to complement that with a program that would teach her how to take an interesting technology and build it into a business.

Lab2Market fit the bill. The program is designed for researchers without startup experience, so Arnold understood that it could help fill in the gaps in her expertise.

In October and November, she spent eight weeks working her way through an online program that taught skills related to the commercialization process, particularly customer discovery and product-market fit.

Working with her in the program as supporting team members were her academic advisor, Adam Fenech, and Ryan Barrett, an industry mentor from the Prince Edward Island Potato Board. Now having finished the course, she said she hopes both will continue to be involved as she takes her company to market.

She also has a name for the business -- or at least, a placeholder.

“I think ‘Irrigation Management Pro,’” she said. “That sounds like the kind of thing you would name an agriculture company. That was the name I came up with. I'm going to have to find something maybe a bit better.”

Crucially, she said, Lab2Market did not just elaborate on these processes in the abstract. Rather, it actively walked her through the process of contacting potential customers and learning about their needs.

For Arnold, that structured process helped her refine how she would market her technology.

Instead of consulting with each individual farm, she will sell software to let growers input video and temperature data gathered by drones to predict not just which areas need watering, but when and by how much.

The predictive power of Irrigation Management Pro is an example of another key benefit Arnold said she was offered by the program. By teaching her best-practices for customer discovery, she said, Lab2Market helped her tailor her offering to different markets.

For example, she learned Irrigation Management Pro would be of little use to farmers in Alberta. In that province, centrally controlled canal systems force farms to order their water days ahead of time, which doesn’t mesh well with Arnold’s solution.

“If my technology only gives you 24 hours’ notice, it may not be useful in every context,” said Arnold. “The customer discovery process gave me an idea of the types of issues growers are working with and the types of features that they would need from a product that I'm building.”

Arnold plans to finish her PhD in about two years. Before that, though, she will build a working prototype of her hardware and software platform this summer.

“There's an opportunity for me to collect a lot of data this growing season that I think will make the algorithm better than if I just use the data I have so far,” she said. “And so, after I collect the data, and process and analyze the data, that's when I feel like I will be ready to turn it into a finished algorithm and then into software.”

The Lab2Market Program is a 16-week program to help researchers validate their ideas with the purpose of finding business/commercial value. The program is based on similar programs that have found success in other parts of the world, but with a Canadian twist.