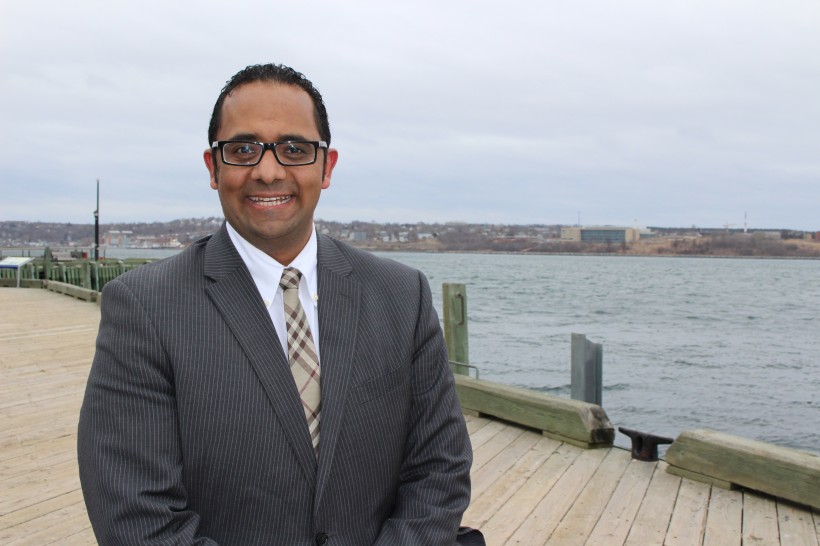 Akram Al-Otumi is the founder of Spritely (Photo Sofia Ortega)

Spritely, a Halifax company that aims to show newcomers around their new cities, showcased its web platform at its soft launch Tuesday night in Bedford.

“This launch is just a taste, and will give users an idea of what the platform will look like,” said Akram Al-Otumi, the founder and CEO of Spritely, during an interview. The complete platform will include the website and a mobile app. Attendees Tuesday night were able to test out the platform and listen to a short presentation on Spritely.

Spritely’s platform is part of the sharing economy model, similar to companies like Airbnb and Uber. The company has a network of "local experts" who can be hired to show newcomers the best retail outlets, entertainment sites, health facilities and the like. Users specify their needs and Spritely's city experts take them on a tour.

“Locals can show people around the city,” said Al-Otumi. “They can show it off and have a meaningful job where you’re showing a newcomer around a new city.”

Al-Otumi says that 75 percent of the revenue is used to pay the city experts, who set their own hours and specialties. City experts must be over 21 and have no criminal record.

So far Al-Otumi has built a network of over 20 city experts and plans to have 100 registered by the end of April in Nova Scotia alone. For the time being, Spritely is testing its platform in Nova Scotia and Ontario.

Ten years ago, Al-Otumi was a Halifax newcomer himself. He moved to Canada when he was 19 years old from Yemen to learn English and attend university.

“I went from having all my family and friends that I was raised with, to a place where it’s a totally different culture, different country, different systems,” said Al-Otumi. “And when you can’t speak the language, it’s quite an experience. I learned so much from a lot of the challenges I faced.”

In his second year of his undergrad, Al-Otumi started a business called Azal Agency, which helped international students settle in Halifax. In doing this, he saw how his model worked and how much it helps newcomers to the city.

“I was a city expert myself,” he said. “I know that this will help newcomers.”

The number of newcomers in Nova Scotia is growing. The most recent data says immigrants make up about 6.1 percent of Nova Scotia’s population, which is about 55,000 people. More than 20 percent of the province’s immigrant population arrived within the last six years.

Spritely can also be a tool for tourists. Said Al-Otumi: “You find a local expert to show you around who can save you a lot of time and money.”

Last summer Spritely completed the 2017 Project Incubation Bootcamp in Halifax, a 12-week incubator at ShiftKey Labs at Dalhousie University, where Spritely is now a resident company.

Al-Otumi says the product will fully launch once the app is built and more market testing is conducted.

“It’s a meaningful business and that’s what really drives me,” said Al-Otumi. “It supports the economy and has a social impact. I want to exist to support people.”