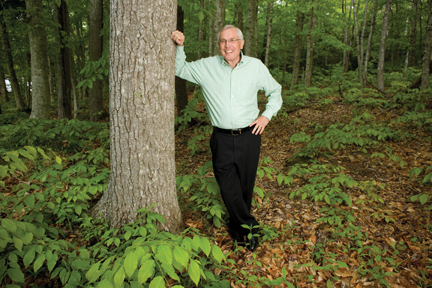 Gerry Pond, often hailed as the dean of the Atlantic Canadian startup community, has been recognized as the first inductee into the InnovateNB Hall of Fame.

The New Brunswick innovation community hosted its first InnovateNB event on Tuesday, featuring a series of workshops throughout the day and concluding with the InnovateNB Awards ceremony. Nine individuals and organizations won awards in categories ranging from best startup to promoting diversity.

The evening concluded with the first person ever being named to the new InnovateNB Hall of Fame, and that person was Gerry Pond. Long a champion of entrepreneurship in the region, Pond is a Co-Founder of the integrated IT company Mariner and the East Valley Ventures investment group. He was also instrumental in launching the Propel IT accelerator and the Pond-Deshpande Centre at University of New Brunswick.

“He is the benchmark of all future inductees,” said Mariner Vice-President of Business Transformation Monica Gaudet-Justason, who accepted the award on behalf of Pond, who was unable to attend the event. “The bar is high.”

Created by such innovation-focused organizations as TechImpact, the New Brunswick Innovation Foundation, the University of New Brunswick’s McKenna Institute, Propel and Envision Saint John, InnovateNB is the successor to the KIRA Awards, which celebrated knowledge-based industries in the province.

The keynote speaker at the awards ceremony was Marcel LeBrun, the Co-Founder and CEO of Radian6, which was acquired by Salesforce.com for $326 million in 2011. He encouraged founders to innovate by executing effectively and trying to achieve things that would improve the human condition.

“I love the name InnovateNB,” he told the 350 guests in attendance. “It’s all about innovation, which means let’s get it done, let’s create a movement, and let’s make the world a better place.”

The winners of the awards are:

The council strives to help newcomers and members of the multicultural community more fully participate in society.

This Fredericton- and Miami-based company, which raised US$100 million in capital last year, has developed technology that helps enterprise clients improve sales. It now employs about 300 people.

Richards, who immigrated to Saint John four years ago, is the Founder of Door2-Door delivery. He recently represented Canada at the G20 Young Entrepreneurs Alliance.

Now in its ninth year, Brilliant Labs helps to encourage the adoption and teaching of technology in schools across Atlantic Canada.

Innovation in Research and Academia

This Assistant Professor at the University of New Brunswick heads the university’s Off-Site Construction Research Centre.

This Fredericton company, which raised $6 million in July, has developed preservatives made from mushroom fibres.

Another Fredericton company, Potential Motors has raised $6.5 million, is developing software for the next generation of electric vehicles.

The 100-year-old municipal utility aims to be a leader in clean energy.

The Premier’s Award for Innovation