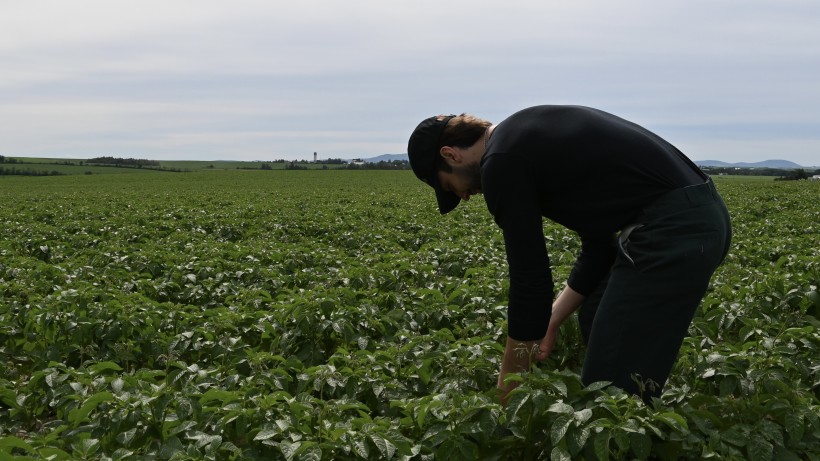 A Picketa employee takes a tissue sample from a potato plant last summer.

Fredericton’s Picketa Systems, which makes fertilizer analysis technology for the agriculture industry, has raised a $300,000 round of angel funding that gives the company about a year of runway.

Chief Executive Xavier Hébert-Couturier said in an interview that Picketa spent last summer gathering data from nine New Brunswick farmers, including its own CTO Dominic Levesque, to train its artificial intelligence system. Now, the company is rolling out what Hébert-Couturier described as an early adopter trial of its software for farmers in New Brunswick and Prince Edward Island.

“The potato planting is just about to start in a couple of weeks,” said Hébert-Couturier. “We're getting everything ready for summer, so it's all hands on deck on both development and just getting (operational details) sorted out.”

Picketa has developed technology that uses tissue samples from plants to advise farmers on when to spread fertilizer and how much to apply.

The company’s co-founders – Hébert-Couturier, Levesque, Maxime Dumont, and Zachary Andersen – were engineering students at the University of New Brunswick when they started the company in 2020 as their “capstone project,” a special assignment in collaboration with the school’s J. Herbert Smith Centre for Technology Management and Entrepreneurship to develop a commercial product with a multidisciplinary bent.

Picketa has gone on to employ five people full-time, as well as two student software developers on co-op work terms. Hébert-Couturier said he expects to hire a handful of researchers to help take tissue samples from plants this summer, as well as programmers and business development staff later in the year.

The angel funding round included contributions from people affiliated with the Saint John investment group East Valley Ventures and Edmonton-based investment group Startup TNT. Hébert-Couturier said the money will pay for a year of operational and staffing costs as Picketa launches its service.

And by next year, Hébert-Couturier hopes Picketa will be selling to farmers across North America. Also on his agenda is diversifying the range of crops for which Picketa can offer advice. So far, the company’s technology only works on potatoes, but he plans to add support for other cash crops, like corn and soybeans.

“With these resources, we can launch our on-site analysis stations in multiple regions and start working with many more farms and agri-service providers directly,” Hébert-Couturier in a press release.

“We will also benefit from our value-add investors who bring a wealth of experience and knowledge to the team with their wide range of backgrounds, from managing farms to building technology companies and so much more."