The construction software-maker is about to finish the Station Fintech Montréal accelerator. 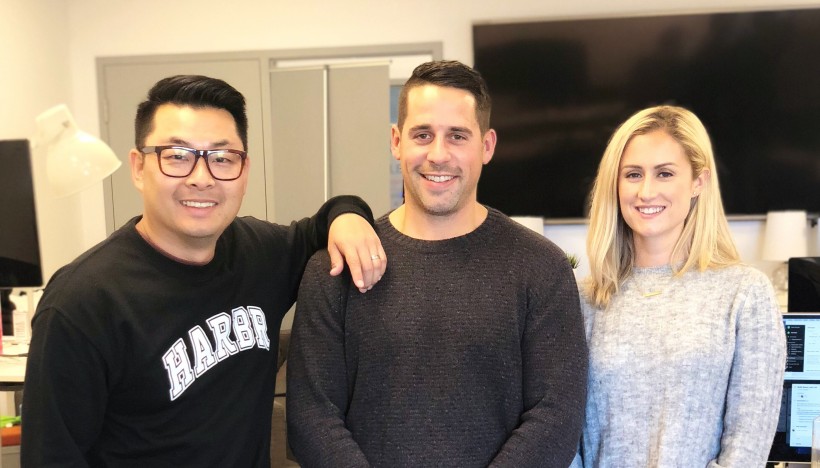 Nearing the close of a $5 million equity raise, Halifax fintech and construction management startup Harbr is running about six pilot projects as co-founders Dave Kim and Jeff and Ashley Kielbratowski prepare to formally launch their new product at the Canada FinTech Forum Thursday.

Until Harbr pivoted earlier this year, the company’s main offering was a communications platform that allowed construction workers to use text messages to send real-time updates about their work to a central database. The work-tracking service is still available, but the platform now also includes features to automate work-tracking and invoicing for contractors.

CEO Kim said in an interview that he considers Harbr to have pivoted because, although the construction management system remains popular, it is now free and no longer a direct source of revenue.

“We call it a pivot because it does fundamentally change the business model of the existing company,” said Kim. “So with the construction management platform, that still provides great value today. We used to charge a SaaS fee and things like that.

“And with this really merging into what is now a fintech business, our business model is more on the processing of payments side and enabling fair financing.”

The company is averaging about 10 new development projects per month for the construction management software, with between 30 and 40 contractors actively using its fintech system as part of the six pilot projects.

As part of the fintech business, Harbr is preparing to ink deals with lenders to provide financing to help developers pay their contractors. The loaned money will be sent directly to contractors by Harbr, but the developers themselves will be the debtors.

Kim said his team is in the process of negotiating with a lender to establish a financing program that would offer developers up to $20 million of credit per month.

So far, the only customers able to use Harbr’s fintech platform are those who Kim’s team has invited to participate in pilot projects -- a list that includes 22 organizations, such as George Armoyan’s Armco Capital, the Nova Scotia Liquor Corporation and Killam Apartment REIT.

By the second quarter of 2022, Kim expects to have significantly scaled-up Harbr’s lending abilities and hopes to open the platform to any interested developers, phasing out the invite-only system. New customers, though, will continue to be onboarded via individual pilot projects.

Kim and the Kielbrtowskis have also spent the last four or five months quietly working on the $5 million equity funding round, which they hope to close soon. They are also raising about $17 million of private debt placements to finance Harbr’s own lending.

The Harbr staff so far numbers nine people, many of whom work remotely from outside Atlantic Canada, and in some cases, North America.

“We have folks in Toronto, folks in Europe -- generally within four-hour time zones, and we’ve been able to mesh that quite well,” said Kim.

“My VP of engineering, Anton Katz, is particularly good at managing distributed teams. So a lot of credit goes to him... In terms of our senior hires, it'll come down to personality fit and obviously cultural fit. But we do anticipate that they will be remote hires.”

In June, Harbr became one of eight startups participating in the inaugural cohort of Station Fintech Montréal, which is an accelerator created by venture capital firm Highline Beta and industry group Finance Montréal.

Harbr’s launch at the Canada FinTech Forum will come as part of Station Fintech’s demo day, which will be held virtually at 11 a.m. Atlantic and is open to the public. Registration is here.