The campaign will help fund production of a portable wind turbine for hikers.

The turbine is a portable power generator designed for campers and hikers who need to charge their devices during wilderness excursions. CEO Cat Adalay said in an interview that the turbine provides 13.3 watts per pound, making it more efficient than currently available portable solar-powered chargers.

“Solar, you know, is half the watts per pound that Shine is,” said Adalay. “Other technologies, such as water turbines or thermoelectric stoves... they don't compare. And so, that's where our value proposition truly lies. It's the most power for the least amount of weight carried.”

Recreational hikers and backpackers often venture into remote regions where electrical outlets are not readily accessible, and Chief Marketing Officer Rachel Carr said most of those hikers carry electronic devices with them that need charging.

The Shine Turbine is small and light enough for easy transport -- about the size of a large water bottle, with a weight of about three pounds -- and will cost US$240 for early bird Kickstarter supporters, which is a 40 percent discount from its planned retail price.

The technology is also capable of functioning in a wide range of weather conditions, anywhere from 0 to 40 Celsius and with wind speeds of between 8 and 28 miles per hour. To account for varying wind speeds and to allow users to store power for later use, it also includes a 12,000 mAh internal battery, which is enough electricity to charge three iPhone 12s.

Adalay said that Aurea’s market research has suggested that the efficiency of the design will also make it popular with people who may not be hikers, but who want to use the turbine to prepare for emergencies, such as power outages.

“We've seen a strong call from that use case as well, which in a way, sort of surprised us,” said Adalay. “We didn't really expect that that would be such a high demand...which is great.” 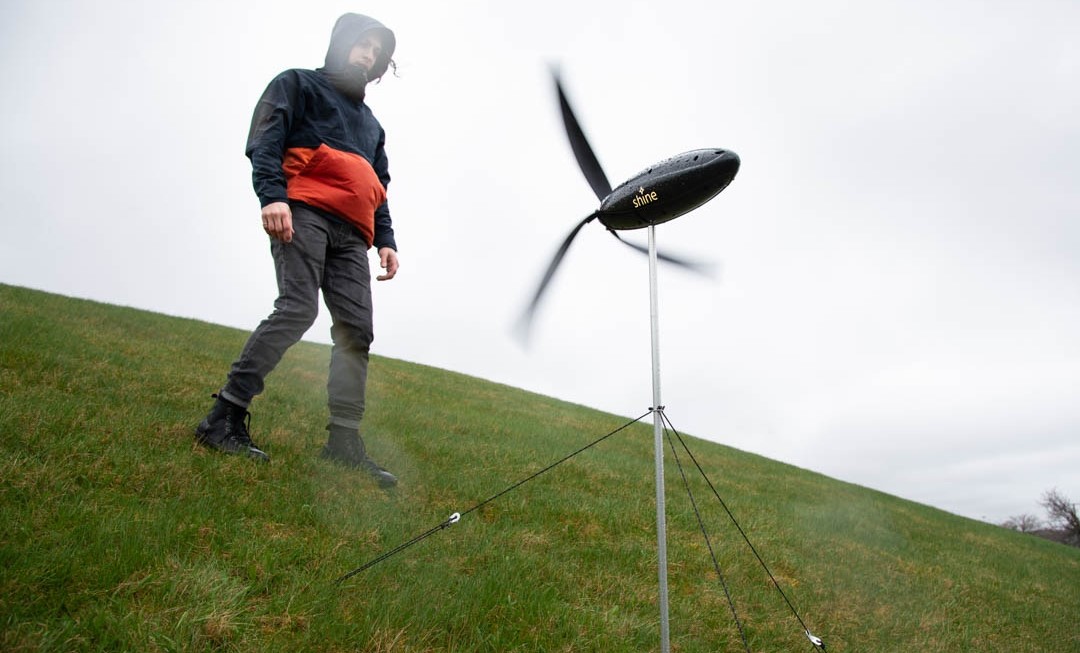 The Shine Turbine represents a pivot for Aurea, which was originally founded in 2017 with the goal of building wind turbines around the periphery of skyscrapers. Adalay said the technology remains viable, but Aurea was forced to change direction in 2018 because the original project was too capital-intensive for a young startup. She did not, however, rule out a possible future return to the skyscraper turbines.

“We're not saying that we'll never do the high-rise system technology,” she said. “However, we've got lots of other things on the go at the moment, lots of other exciting opportunities.”

After refocusing on the Shine Turbine, Adalay and her team took about three years to get it ready for market, with most of that time being spent solving incremental engineering problems that will help differentiate the turbine from its portable power competitors.

For example, the Shine Turbine pivots to face the wind from its mount, and its patented blade design reduces air vortices around the device, which helps make it quieter and more efficient at rapidly creating power.

CMO Carr said Aurea decided to pay for the manufacturing of the turbine with the help of Kickstarter, rather than through more conventional funding sources, because the Shine Turbine fits the profile of other products that have done well through Kickstarter.

“We have a very highly engineered and aesthetic product, and crowdfunding campaigns tend to do well with things like this, that kind of appeal to a very technical, design-oriented audience,” she said.

Now, with the Kickstarter about to launch, Aurea is in the midst of what Adalay describes as a “hiring frenzy."

By the end of the year, she expects to have about 20 employees, and hopes to soon begin pushing into foreign markets: “We do have a U.K. subsidiary, as well as an office in York, England." she said. "So, we're looking at expansion in the U.S. and overseas.”