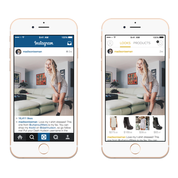 Dash Hudson, a Halifax company that helps shoppers purchase clothes they see on Instagram ads, has raised $1 million, including funding from two of the province’s leading tech entrepreneurs, Jevon MacDonald and Gavin Uhma.

While the money is significant to help the company grow, the Dash Hudson statement Tuesday reveals how the company has secured a network of leading advisers and investors in both the technology and fashion worlds.

Innovacorp contributed $350,000 to the round raised by CEO Thomas Rankin, who worked for the provincial innovation agency from 2011 to 2013. The other new investors include MacDonald and Uhma, who co-founded GoInstant in 2011 and sold out to Salesforce for a reported price of more than $70 million a year later.

Dash Hudson may add to the round if other investors come in.

“Obviously, I had knowledge of Thomas by working with him previously here,” said Charles Baxter, Innovacorp vice-president of investment, in an interview.

“One thing I liked about Thomas is he’s a guy who sought out top-notch advice.”

Rankin and chief technical officer Tomek Niewiarowski launched Dash Hudson in late 2013 as an e-commerce fashion site for men. Last summer, they changed their model so they work more closely with fashion houses or retailers advertising products on the photo-based social network.

Dash Hudson allows brands’ creative talent to place photos on Instagram of models wearing their clothes with relevant descriptions. With an elegant model and a visually pleasing photo, the seller can make sure the clothes are presented in the best light. And using Instagram, the ads can be sent out to a vast range of potential shoppers.

People who have registered with Dash Hudson can then “like” the image and are taken instantly to the Dash Hudson site, where they can buy the product online. Dash Hudson handles order processing with the product provider and bundles items, when possible.

Dash Hudson is available on the iPhone, and the company plans to have an Android version later this year. The goal is that the entire social media and shopping experience will be carried out on the user’s phone or mobile device.

“For our audience, Instagram is their stage, their glossy mag and their shopping mall,” said Rankin in a statement. “With brands spending over $1 billion per year on Instagram marketing, with no (return on investment), there’s a big opportunity for us to help turn that spend into meaningful results.”

Since the new service was launched in December, the ads linked to Dash Hudson have reached about 3 million people. Baxter said the company now has in “the low tens of thousands” of users.

Baxter said Innovacorp was comfortable investing in the former employee’s company because of its rising user base and because of the quality of investor it attracted and continues to work with.