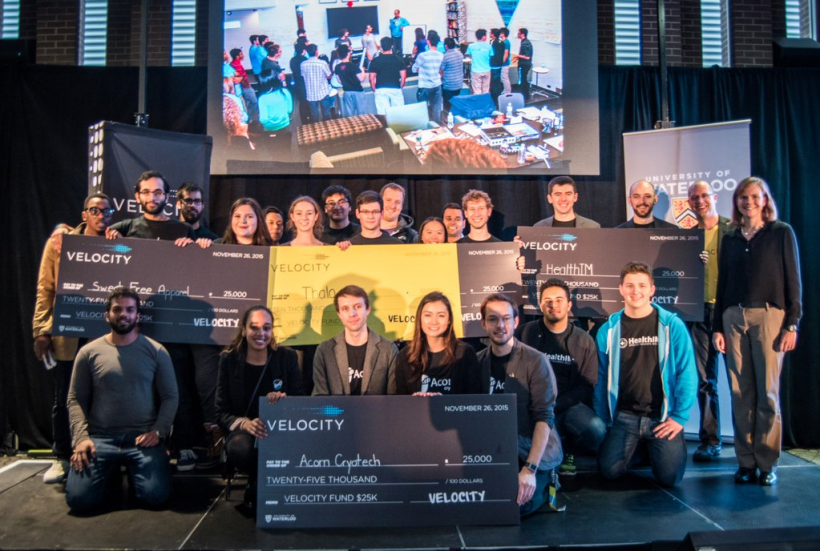 The winners, judges and organizers. (Photo from Velocity)

The Velocity Fund has handed four more companies at least $25,000 each to help with their development.

As it does each school term, Velocity, the University of Waterloo’s accelerator, donated money to the best companies in its accelerator program, which is populated with students and grads from the university and their business partners.

The Velocity Fund was largely inspired by Ted Livingston, the Founder and CEO of chat provider Kik, who four years ago donated US$1 million to the fund when he was just 23. It now hands out about $400,000 a year to help develop startups affiliated with the university.

Read About All 10 Finalists

The finals were held hours after Velocity announced an ambitious expansion plan, which will make it the largest incubator in North America that doesn't take equity stakes in its clients. The $25,000 winners announced on Thursday in the 14th finals  were:

Thalo – This company is developing a revolutionary screen for mobile devices that can be read even in glaring daylight. The screen, which should be ready for smart watches next year, also extends battery life. Rather than a back-lit display, Thalo uses reflective technology to gather in surrounding light. “We’re re-imaging the pixel from the ground up,” said Founder Ryan Marchewka. As the top hardware company in the competition, Thalo won an additional $10,000.

Acorn Cryotech -- Acorn Cryotech preserves the cells of youthful people today as a resource to draw from for personalized medical therapy in the future. This provides a bank of youthful cells, for use in growing new immune-compatible organs, genetic therapies able to revert damage, and mutations that accumulate with age.

HealthIM -- HealthIM is developing an online system that improves the efficiency of police departments encountering mentally ill people. The Toronto Police Department, for example, deals with 20,000 mentally ill people a year, and each takes hours to process. HealthIM, which is already being used by two police departments, improves communications between police in the field and hospitals, so the patient can be diagnosed while they’re being transported.

Sweat Free Apparel – This company has designed a three-ply pad that fits in the armpit of an undershirt, preventing sweat stains from ruining clothes. The company is now testing the product.

Earlier in the day, 10 teams pitched in the Velocity Fund $5,000 competition. Three teams walked away with $5,000 prizes: Finuvo with Best Pitch, BioFlex Implant with Most Innovative product, and Hash with People’s Choice.