The region has some generous investment tax credits, but the investor pool is too small. 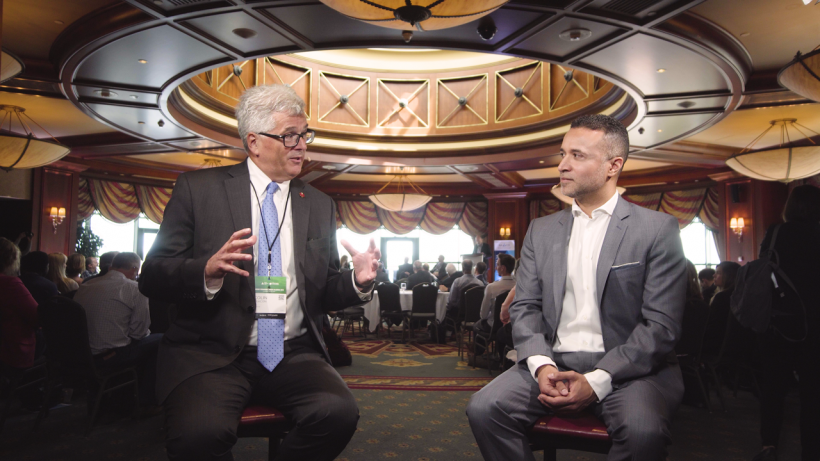 NACO CEO Claudio Rojas, right, has been a champion of equity tax credits for startup investments.

The wheels are in motion to create an Atlantic Canadian angel funding group, but its effectiveness will be restricted by the lack of a pan-regional investment tax credit.

We’ve written before about the decline in angel funding in 2019, and the likelihood it will decline further in 2020. One solution is to institute an angel funding group that spans the region, and that will likely happen. In recent interviews, Claudio Rojas, CEO of the National Angel Capital Organization, and Kathryn Lockhart, CEO of Propel, have both indicated that different groups are working on putting together an angel group.

The effectiveness of such a group may depend on whether provincial finance departments show some flexibility in their investment tax credits. These credits offer investors a percentage of their investment in high-growth companies back as a tax credit, up to a maximum level for each investor.

The problem is not the generosity of these programs. They are generous, especially in Nova Scotia and New Brunswick. The problem is they apply to a miniscule pool of investors, thereby limiting their benefit to the economy.

The good news is that Atlantic Canada has investment tax credits. Alberta canceled its Investor Tax Credit in 2019, and there is no such policy offered by Ontario, Quebec, Saskatchewan or the federal government.

Indeed, Nova Scotia improved its program in 2018, increasing the investment ceiling from $25,000 under the old Equity Tax Credit to $250,000 under the new Innovation Equity Tax Credit, or IETC. It also increased the value of the tax credit for investments in oceantech and life sciences – investors in these sectors receive tax credits worth 45 percent of their qualified investment, rather than the standard 35 percent. New Brunswick offers a 50 percent tax credit on investments of up to $250,000. Only Manitoba has a more generous program.

Though Nova Scotia has enhanced its program, so far the cost to the provincial treasury has been modest. We asked for and received this data from the Finance Department in August on the costs of the IETC since it came into being in January 2019.

*Since the IETC came into being on Jan. 1, 2019, this data is only for Jan-March 2019. It does not include the credits issued under the old Equity Tax Credit, which was in place for the first nine months of the fiscal year.

The data for the 2019-20 fiscal year is important because it shows an entire 12-month period before the pandemic distorted all economic data. Roughly 13 companies (there may be companies that had more than one issue) raised a total of $7.2 million, costing the provincial treasury $2.9 million. This is less than the amount approved by the Finance Department – the actual credits issued amounted to about one-quarter of the $11.1 million approved. It’s possible some may be issued in later fiscal years. But the evidence shows that the actual cost of the program in its first full fiscal year was less than $3 million, and that about 13 companies benefited.

So what’s the problem?

The problem is that the pool of investors is simply too small for the provincial tax credits to have a meaningful impact.

The low income levels in the region exacerbate the problem. Angel investors should be “accredited investors”, meaning people who are wealthy enough that they can withstand the losses that often come with these sorts of investments. That tends to mean an individual earning more than $200,000 a year and/or having financial assets of more than $1 million.

This species is rarer in the four Atlantic Provinces than the rest of Canada because we have the country’s lowest household income, as can be seen in this chart.

Even though founders in New Brunswick and Nova Scotia can offer some of the most generous tax incentives in Canada to potential investors, they have fewer targets than in other parts of Canada. And that will impact the operations of a pan-regional angel group. If it finds a great investment in, say New Brunswick, only one-third of its members could apply for an investment tax credit (assuming the angel group’s membership breaks down in proportion to provincial population). That will hamper the funding efforts of any company tapping the angel group to raise capital.