Startups Land $1b in Funding in 30 Months

As we release our annual data report, we find a surge in investment. 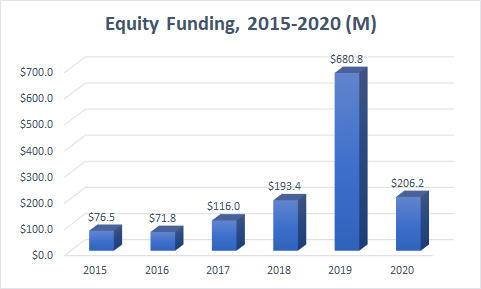 Atlantic Canadian startups have raised more than $1 billion in growth capital in the last 30 months, according to research released today by Entrevestor.

Today we're publishing the 2020 Atlantic Canadian Startup Data Report, which shows that East Coast startups rebounded with vigor from the initial shock of the pandemic. Though the creation of new companies slowed down, employment and revenue growth matched the levels of recent years and the community overall raised $206.2 million in equity funding.

In fact, that wave of funding carried over into 2021, and we estimate Atlantic Canadian companies raised $243.4 million in equity funding in the first half. That brings the total investment of growth capital in the region to about $1.1 billion since the beginning of 2019.

“It shows the impact of the institutions [in the area] like COVE and Dalhousie University and their success in supporting startups,” said Munro at the launch of the Halifax Index on Thursday. “This just leads to more and more confidence so that more people will step forward and try to launch their own startups.”

Each year, Entrevestor publishes its Atlantic Canadian Startup Data Report to give policy-makers and community members the metrics needed to assess the evolution of the region’s innovation economy. We gather our information by surveying founders and CEOs (We got 163 responses this year) and conducting hundreds of interviews as journalists. This is Entrevestor’s eighth annual report on high-growth, innovation-driven companies in the region. The Atlantic Canada Opportunities Agency, Innovacorp and the Halifax Innovation District led a group of backers that allowed the study to be conducted and made public.

Though the pandemic disrupted the global economy, Atlantic Canadian startups had a banner year, with St. John’s-based Verafin announcing its US$2.75 billion exit and Halifax’s CarbonCure securing investment from Breakthrough Energy Ventures, Amazon and others. The 2020 Atlantic Canadian Startup Data Report found that the region’s life sciences companies benefited from the new focus on medical innovation, while IT companies capitalized on the digital transformation accelerated by lockdowns.

The 74-page report, co-authored by Avery Mullen and Carol Moreira, also found that:

In the last week, we also added up the total funding for the first half – an exercise sparked by Introhive’s US$100 million (C$122 million) venture capital round announced last week. There have been a lot of big deals this year, including major fundings by Goodleaf, Outcast Foods, Cape Privacy and others.

Let’s compare that to funding five years ago: In the three years to Dec. 31, 2016, Atlantic Canadian startups raised $275.2 million. It was a longer period of time and didn’t take place during a pandemic, but funding was only one-quarter in 2014-16 of what we’ve witnessed in the past 2½ years.