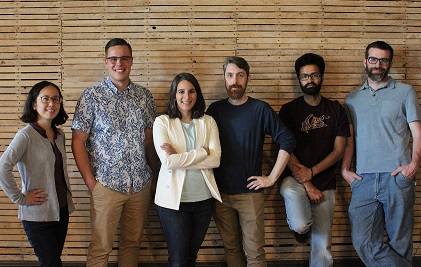 The SomaDetect team earlier this year. It's grown since this picture was taken.

SomaDetect has raised an undisclosed amount of funding from the Dairy Farmers of America as the AgTech company moves closer to completing its seed round.

The parties have not released the amount invested by DFA. However, Co-Founder and CEO Bethany Deshpande said in an interview that the funding is part of a larger round that has yet to close. The big impact of the DFA funding is it strengthens the company’s ties with a group that represents almost 15,000 dairy farmers, she said.

Based in Fredericton and Buffalo, NY, SomaDetect provides dairy farms with hardware and software that can scan a cow’s milk and provide instant data regarding the cow's health. Currently, farmers rely on monthly data to make management decisions. With SomaDetect, farmers have access to daily measurements for every cow.

The company’s patented technology uses a laser to scan the fat content and somatic cell count of raw milk. This process can detect mastitis, an udder disease, as well as measure the milk’s quality.

“DFA and their members have been a great mentor and partner for us, and we’re excited to continue working with them to help bring the SomaDetect platform to dairy farmers across the country,” said Deshpande in a statement. “Dairy farmers have been our greatest teachers and allies throughout the development of our company and technology, and our goal is to show them the same care they show their herd.”

Kansas City, KS-based DFA is a national cooperative owned by dairy farm families across the U.S. It emphasized in its statement that it is investing in SomaDetect because its software will use artificial intelligence to help farmers assess the health of their herds.

SomaDetect recently completed the 2018 Sprint Accelerator program, which is also sponsored by DFA.

Said David Carr, President of Farm Services at DFA: “This is a potentially game-changing technology for our farmers and the industry as it allows dairy farmers to know the health of each cow and quality of milk in real time. With access to better data, our farmers can make more knowledgeable decisions, which is a huge value.”

Deshpande said the company is now working on a funding round that will include investments from a few groups, including DFA. The company in June said it had received an investment of $250,000 from the New Brunswick Innovation Foundation. Deshpande said it has also received investment from Igan Partners of Toronto and she is in talks with a few other funders.

SomaDetect is now based in Fredericton and Buffalo as a result of the company winning US$1 million after being judged the top startup in the Buffalo-based 43North accelerator’s 2017 cohort. The company will grow to 21 employees by the end of the year, about half of them in Canada, said Deshpande.

SomaDetect has been testing its sensors and is now planning paid beta tests early next year at 27 farms, using 350 of its sensors. It hopes to have its product on the market in a full launch by the end of 2019.

“We have, in every way over the last year, done a lot of work to make the sensors more manufacturable and be able to scale the manufacturing,” said Deshpande in the interview Friday. “So now we’re working on our algorithms.”