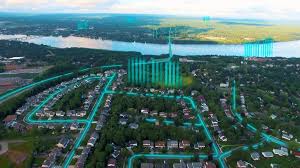 While Atlantic Canada’s nautical types are pushing ahead with the oceans supercluster proposal, there’s another major initiative in the region that has captured less attention but still offers great potential.

Centred in New Brunswick, the Smart Grid Initiative is developing a range of products that utilities can use in their grids to accommodate the coming revolution in electricity production. The work has been going on for about five years, and recently received a push from its application for federal supercluster funding.

The initiative didn’t make the shortlist of proposals that will divide $950 million in federal supercluster funding (the oceans proposal was the only Atlantic Canadian finalist), but the Fredericton team is continuing with the hopes of tapping other federal programs for funds.

Senior members of the smart grid team say that just applying for the supercluster program helped to sharpen their focus.

“Originally, this was a bit more university-driven, and then the supercluster came out and there was the demand for it to be industry led,” said Pierre Mullin, vice-president of Digital Grid Software Solutions, at Siemens in Fredericton.

“One message that industry is giving the federal government is that we’re really good at doing research here in Canada but we’re not very good at commercializing that research.”

Like the oceans initiative, the smart grid program is not a single project. It’s many projects that aim to improve the distribution and consumption of electricity — from generators to consumers and all the networks of wires in between.

This distribution model is changing as large- and small-scale renewable producers are brought on to the grid. Soon storage systems will change the industry more, and some household generators may even be able to sell surplus electricity to the grid.

The goal of the smart grid movement is to use cutting-edge technology in the grid to optimize the introduction of these new technologies. Add in improvements through data analytics and mobile applications, and you can understand that in the future the electricity grid will be far more than a series of wires.

The work began about five years ago when Siemens signed a deal with NB Power to work together on the energy system of the future. Over the years, it grew with Halifax-based Emera and University of New Brunswick joining the initiative. The four organizations today form the pillars of the Smart Grid Initiative.

UNB, which has opened the Emera & NB Power Research Centre for Smart Grid Technologies, now has about 22 graduate students doing research on these projects, said professor David Foord, who has been working on the research. The plan is to increase that number to 60 graduate students, many of whom would go on to become employees for the private-sector partners in the initiative.

The work will include some specialized institutes in Fredericton, such as the Institute of Big Data, which could work on data analysis to improve efficiency, and the Institute of Cybersecurity, to make sure that smart grids cannot be hacked.

Foord added that the plans include working with startups — such as Fredericton-based companies SimpTek Technologies and Trispectra — which can develop and implement the innovation needed to improve the efficiency of the grid.

Participants in the plan say the market for these products is huge because all utilities realize they have to keep abreast of the tsunami of changes about to hit their industry.

“What we’re facing is a pretty disruptive change in the way the electrical power grid works,” said Mullin. “And we’re seeing (government) policy impact on that as well. Utilities are facing challenges in that if you don’t keep your eye on the ball you could be facing some serious changes in your business.”