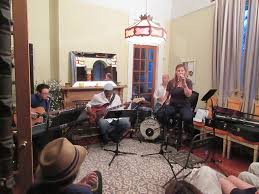 Kicking off an interview about her new music-technology business, Laura Simpson excused herself to text a friend in Los Angeles about an upcoming Janet Jackson concert in someone’s L.A. home.

This is the world that Simpson lives in now — organizing and promoting concerts in people’s homes. Her new startup, Side Door Access, is developing a platform on which performers can link up with homeowners interested in hosting a concert, and an audience who would want to attend. (Side Door didn’t organize the Jackson show, but Simpson heard about it and had to tell her friend.)

The technology isn’t in place yet but Side Door has already been arranging concerts in people’s homes across the country, and Simpson says the demand from hosts, musicians and audiences is big and enthusiastic.

“Parlour music, if you want to call it that, has been around longer than recorded music,” said Simpson at her booth at the Atlantic Venture Forum this week. “The monetization of music is changing, but what is constant is that love of the musical experience . . . or the intimate feeling that is lost when it’s more than a 100-person space.”

A former journalist with 10 years of experience in the music industry, Simpson is CEO of the team that includes Juno Award-winning singer-songwriter Dan Mangan, and Laura “LuLu” Healy, who has headed bookings for the Rebecca Cohn Auditorium and the Halifax Jazz Festival.

They perceived a huge pain the music industry. Though the live music industry was worth $28 billion last year, concerts are too expensive for some fans, and musicians often have spare nights between bookings at traditional venues. They thought musicians could play in people’s homes and that a broad range of people would pay to attend. They’re not talking about mega-stars like Janet Jackson but tremendous musicians who can offer intimate performances in a great setting.

“This is already happening in thousands of homes around the world,” said Simpson on Monday night, when she presented Side Door at the Propel ICT Demo Day. “But there’s no one network linking them together. Side Door will be that network.”

Using the most rudimentary technology last year, Side Door floated the idea online of staging home concerts for musicians. In short order, they had 160 homeowners volunteering their living rooms as venues, and they were able to schedule tours for six artists, grossing $45,000 from British Columbia to Atlantic Canada.

They have continued to build up their network, and they now have a minimum viable product. So far, more than 50 professional artists, 200 hosts and 2,000 fans have registered.

Side Door is now trying to raise $250,000 in funding, and has commitments of $75,000 from family and friends. The trio is talking to other investors and hopes to have the funding in place by September. If so, they plan to hire a chief technical officer, who could oversee the development of the platform, creating a virtual ticketing agency by January. The company is forecasting $200,000 in gross sales this year and $2.3 million next year because of the demand and chic allure of home concerts.

“We’re very connected to the underground scene because people really like this exclusive and unique experience,” said Simpson. “Every time you get in a conversation with an aficionado, they’re going to be in the know about something off the beaten path, and we want to get more of these events.”