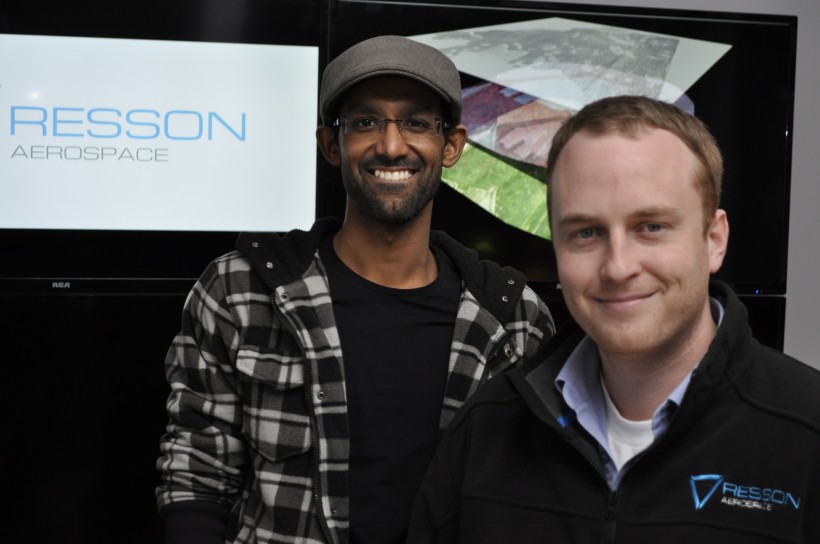 To understand why Resson Aerospace landed $3 million in its first funding round, it’s important not to focus too closely on the word “Aerospace” in its name.

Many companies involved in data-based agricultural analytics are focused on using drones to gather data from fields. But Fredericton-based Resson is developing an integrated system, complete with machine learning, that helps farmers and agriculturalists improve production and reduce fertilizer use.

The company’s co-founders Peter Goggin and Rishin Behl announced Thursday that the company has secured $3.025 million in an A Round of funding led by Rho Ventures Canada of Montreal and Boston and Build Ventures of Halifax. The other investors in the round are BDC Venture Capital of Montreal, New Brunswick Innovation Foundation of Fredericton and a handful of individual investors.

What’s impressive about the deal is that Resson is only 18 months old. Since it incorporated in May 2013, Goggin and Behl have devised the Resson Agricultural Management and Analytics System, or RAMAS, to analyse a broad array of data, and secured McCain Foods of New Brunswick as an anchor customer.

“Resson provides real value to an important industry,” said Rob Barbara, a Partner at Build Ventures. “Resson's customers not only enjoy significant increases in profit by using RAMAS but the world also benefits from bigger and cleaner crops.”

RAMAS collects data from several sources on a farm – from tractors, from sensors buried in the field, from aerial drones flying over the field. It brings all the information together and presents the farmer with a report on what is happening in his field and what actions need to be taken. It might identify a disease that’s broken out in one section and has to be destroyed. It might show another section needs more water or fertilizer.

Using RAMAS, Resson’s goal is to improve agricultural yield by 10 percent and reduce the need for agricultural chemicals like fertilizer and pesticides by 12 percent.

Behl, the company’s Chief Technology Officer, said the system also learns over the long-term from the data so that it keeps on improving its analysis of the growing conditions. “The more data the system processes, the more intelligent it becomes,” he said. The Resson team developed the business with the aid of three accelerators or incubators – the Pond-Deshpande Centre at University of New Brunswick; the ACcelr8 program at Planet Hatch; and Propel ICT’s Launch36 accelerator.

After it graduated from Propel this past summer, the company received $250,000 in convertible debentures from BDC Venture, which went into the current round. It also met Rho Partner Jeff Grammer, who had already invested in three Atlantic Canadian startups. Behl said the meeting with Grammer was almost anti-climactic – an extremely systematic examination of the potential market and sales projections.  But at the end, Resson produced one of the best scores ever in Rho’s evaluation system.

“Their technology is very unique and highly technical,” said Grammer in an interview. “They’re in a field that’s getting a lot of attention.”

On the business side, Resson announced in July that it would be working with McCain, one of the country’s largest food companies. The initial work with McCain this autumn allowed the team to calibrate its system so it will be able to gather and interpret data through a full growing season next year.

Resson now employs seven people and expects to raise that number to 12 by the end of March, mainly through the hiring of programmers. Goggin, the company’s CEO, said the company is also in talks with other major agricultural companies and hopes to be able to announce new customers within four to six months.

“We are seeing big companies -- like the major agricultural companies of the world -- are looking at us,” he said. “So it all looks good right now.”