Atlantic Canada's proportion of Canadian VC is at a seven-year low. 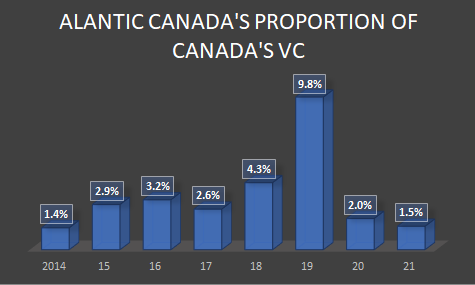 The region's portion of the Canadian VC market (Data for 2021 reflects the first 9 months).

If you dive into data provided by the Canadian Venture Capital & Private Equity Association, or CVCA, you could make either argument. It would depend on whether you’re looking at the absolute dollar figures or Atlantic Canada’s share as a proportion of the Canadian total.

It’s four weeks until New Year’s Eve, so things could change, and so far the CVCA has only released its data for the first three quarters of the calendar year. In those nine months, Atlantic Canadian startups attracted $180 million, led by a record-breaking run in New Brunswick. There’s a chance Atlantic Canada’s 12-month total for this year could reach $300 million, which would make it the second-best year ever, exceeded only by an outlying performance of $608 million in 2019. 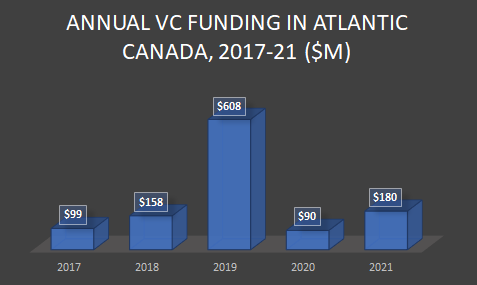 Well, every silver lining needs a cloud, and here’s a small cause for concern about the numbers we’re seeing in Atlantic Canada: we’re falling behind the rest of the country.

It’s true that Atlantic Canadian startups have raised more venture capital ($180 million) in the first nine months of this year then they ever have in any full year other than 2019. But here’s another truth: Canada as a whole is seeing far stronger growth in VC than we are on the country’s East Coast.

The CVCA reports that Canadian startups raised $11.8 billion in venture capital in the first nine months. That’s almost three times the total for the full year in 2020 and almost double the 12 months of 2019, the best year up to now. 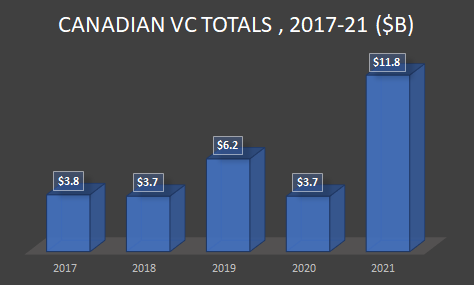 What’s happening in Canada this year is part of a global explosion in venture capital. The cover story of The Economist last week focused on this phenomenon under the headline “Adventure Capital”  The magazine quoted Pitchbooks as saying the global VC industry is on track to invest US$580 million this year, an increase of 50 percent over last year.

The Economist says it means VC investors are looking beyond Silicon Valley and finding opportunities in out of the way places. Sounds good, but Atlantic Canada so far has been capturing a smaller slice of the Canadian VC pie than it has in recent years.

Does it really matter?

You could argue that it doesn’t. Introhive of Fredericton and Miami raised $100 million in a deal led by Boston-based PSG, and CarbonCure Technologies of Dartmouth has raised money from Breakthrough Energy Ventures, a cleantech investment group backed by the richest people in the world. And outside the VC space, Dartmouth-based Meta Materials Inc. raised US$160 million this year when it listed on the NASDAQ in New York. It now has unicorn status.

And yet, the region has to improve on this performance in the long-term. The VC world is now dominated by megadeals, those worth $50 million or more. We’re getting a few of those by companies like Introhive and Fredericton- and New York-based Sonrai Security. But the mission of the startup community has always been to transform the Atlantic Canadian economy. That would probably mean we need a workforce of at least 20,000 people in high-growth companies. And to reach that level, Atlantic Canadian startups would need to attract more of these massive raises.

It’s easy to identify the companies that have the potential to do that in a few years. But for now, we’re seeing too few of these deals.