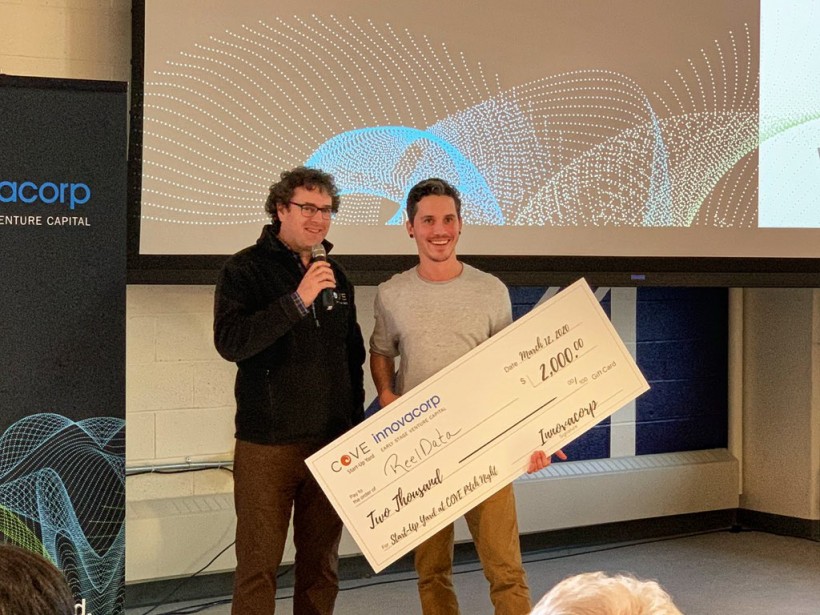 ReelData, an artificial intelligence company that targets the aquaculture industry, captured the $2,000 first prize at the Start-Up Yard at COVE Pitch Night on Thursday.

Start-Up Yard, the oceantech hub on the Dartmouth waterfront, brought together 10 early-stage entrepreneurs to pitch their companies, and awarded a total of $4,500 in prize money to the winners.

“I know these companies,” said Shelley Hessian, the Executive Director of Start-Up Yard. “They are committed and all of them are looking to solve big problems in the ocean sector.”

The top prize went to Halifax-based ReelData, whose software analyzes video from inside aquaculture tanks to determine the biomass and health of the fish stock, and ensure the fish are getting just the right amount of food. Co-Founders Matt Zimola and Hossein Salimian have already landed customers in Iceland, Canada and the U.S.

Copsys Founder and CEO Farzad Hashemi told the audience his company has developed a “corrosion management system” for ships’ hulls and underwater infrastructure. It features a coating that halts the corrosion of metal and prevents the buildup of such pests as barnacles. The coating works in conjunction with a micro-processor that can detect corrosion-prone areas and address them before the corrosion has even begun.

Impactful Health R&D President and CEO Mina Mekhail described his company’s compostable active packaging that extends the shelf-life of fish by about 15-30 percent. This packaging can decrease food waste in the fish industry (which amounts to 2.3 million tonnes a year in North America) and increase sales for both processors and retailers. Once the packaging is discarded, it can be composted so it doesn’t add to plastic buildup in landfill.

Innovacorp, which oversees Start-Up Yard and hosted the competition, also polled the pitchers to find out how they rated their peers, and Halifax-based SeaChange Biochemistry won the $500 Presenters’ Choice award.

Co-Founder Sabrena MacKenzie said SeaChange produces chemicals for industry from brown seaweed, which is increasing so fast in the oceans that it is posing huge ecological and economic problems. SeaChange has produced three chemicals from this seaweed and will have products for sale by June.

The other presenting companies and the executives who delivered their pitches were: