Mark Dobbin is the group's Angel of the Year, while Gerry Pond received a Lifetime Achievement Award. 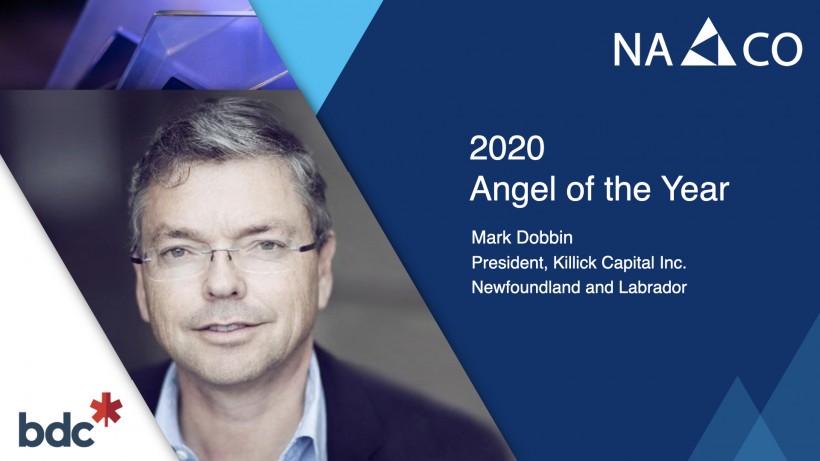 The National Capital Angel Organization has presented its Angel of the Year award to Mark Dobbin, the Founder and President of St. John’s-based Killick Capital, and given Gerry Pond a Lifetime Achievement Award.

The awards were announced Thursday during NACO’s Atlantic Summit, a virtual national event that focused on angel funding and the development of early-stage companies in Atlantic Canada.

Based in Toronto, NACO is dedicated to developing and supporting angel networks across Canada. Its members include more than 4,200 angel investors, more than 40 angel networks, and more than 45 incubators or accelerators. It has been pushing in recent years to establish a pan-regional angel network in Atlantic Canada.

“I am honoured and humbled to receive this recognition from NACO,” said Dobbin during the virtual summit. “I accept this award in the spirit in which it was given, in that it is meant to recognize the contributions to our country’s economy by those who provide capital and mentorship to early-stage companies.”

Dobbin and Killick Capital have been a driving force in the development of the startup community in St. John’s, and more recently have made more investments in other parts of the region.

The group was an early investor in Verafin, the fintech company that recently exited for US$2.75 billion. Killick exited its Verafin investment in 2015, about the same time the investment group sold off four of the six divisions of Killick Aerospace for about US$229 million.

Since then, Killick has backed several winners in the St. John’s startup communities. Its portfolio companies CoLab Software and Sequence Bio both attended the Y Combinator accelerator in Silicon Valley in 2019. Mysa Smart Thermostat, which Killick also backed, was accepted into the Lazaridis Institute’s Scaleup Program and this year raised $8 million in follow-on funding.

Living in the Saint John area, Pond has been a leader in the IT field for almost half a century, having served as the CEO of NB Tel and backing some of the region’s most successful companies, like Radian6 and Q1 Labs. His leadership in those two companies was recently celebrated in the book Unicorn in the Woods by Gordon Pitts.

As well as serving as the Chairman of Mariner, one of the largest IT companies in the region, Pond is an active investor in early-stage companies through East Valley Ventures. The East Valley portfolio has had a few exits in the region in recent years, such as Brovada and Cirrus9, and includes such promising companies as Kognitiv Spark and Squiggle Park.

Pond is also a Co-Founder of the regional IT accelerator Propel and the Pond-Deshpande Centre at the University of New Brunswick.