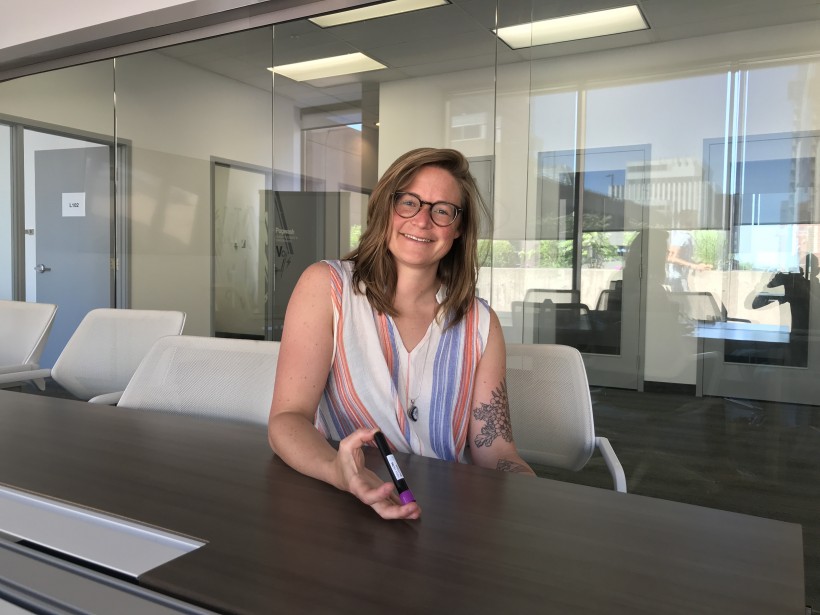 Co-Founder and CEO Franziska Broell pitched the company at the finals on Wednesday at BioNova’s Bioport Atlantic competition. The other finalists were Charlottetown-based AgTech company Fieldetect, and Halifax-based SeaChange BioChemistry, which will manufacture high-value compounds from biomass.

Now in its ninth year, BIC is designed to support young life sciences companies by teaching contestants how to pitch for investment. As the winner, Motryx will receive $25,000 in seed funding and a $30,000 advisory services package to develop its business idea.

Because hospitals and healthcare systems are becoming bigger and more centralized, blood samples are often shipped to labs over great distances, sometimes including air shipment. About 3 percent of samples end up being unusable because they are ruined due to the time, temperature or vibrations involved in the trip. Motryx has developed blood vials with sensors that transmit to labs data on the conditions during the trip, allowing lab officials to identify problems and solve them.

“In the last six months, we’ve secured eight early adopter clients in Europe and the U.S., and we’ve been able to convert two into paying clients,” Broell told the panel of judges.

The company is also doing a pilot in Africa in collaboration with the Bill and Melinda Gates Foundation. The company so far has raised $1.5 million, including investment from Killick Capital and Concrete Ventures.

Co-Founder Chris Rafuse said the company, which was founded this year, has found a method to use a form of biomass to produce three industrial compounds: polyphenols, which are used in pharmaceutical industries to help with obesity and Type 2 diabetes; lactic acid, which can be used in 3D printing, plastics and other industrial uses; and another compound that Rafuse declined to name.

Refuse said the company is attacking a $4 billion global market opportunity, and current methods of producing these materials involve extraction from petrochemicals and result in a lot of waste. There is no waste with the SeaChange process, he said, and users demand more sustainable sourcing.

“We’ve never made an outside call,” said Rafuse, adding that the company’s six prospective clients all contacted SeaChange. The company will soon be ready to start selling. “We want to hit the market hard and fast so no one sees us coming and we think we can gain a lot of market share very quickly.”

Operating under a licensing agreement with the University of Prince Edward Island, Fieldetect is developing a hand-held device that will allow farmers to detect disease in their herds fast enough to prevent a large outbreak.

President and Co-Founder Andrew Trivett said the company is beginning with hog farmers, who now have to take samples from their herds and send them to a lab to be tested. In the day or two it takes to get the results back, a disease could spread, possibly leading to a cull of the entire herd.

“What if we could take that test and have the farmer do it themselves, have it take less than an hour and get the result immediately?” asked Trivett.

Fieldetect has developed LabAnywhere, a handheld device that will test a sample from the animal and give farmers the results on their smartphones in about 40 minutes. The team expects to begin shipping the product in late 2020 and sell about 500 units in the subsequent 12 months.