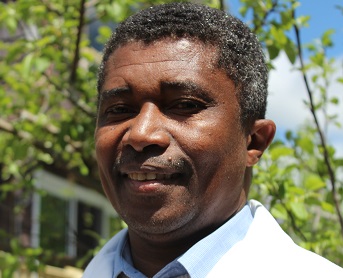 Jean Mamelona: 'This is a dream come true.'

Growing up on the island nation of Madagascar, Jean Mamelona became fascinated by the ocean and marine life. Now, the biochemist is launching a seaweed-based weight-loss aid from his Moncton startup, Biomolecules for Life.

Mamelona and his partner, Denis Brion, a marine chemist with experience in market development, began their venture in January 2013 with the aim of producing health supplements made from seafood and marine biomass.

They have recently launched their first product, OceanSlim, a dietary aid that Mamelona said will assist dieters in losing up to one pound a week.

The public are naturally suspicious of weight-loss aids because there are so many that promise miraculous effects but fail to deliver. Some can even be harmful. Mamelona said the fact Health Canada has approved the OceanSlim soft gel capsules makes marketing easier.

To win approval, the company had to prove their product does not contain anything harmful, that it has been processed cleanly and that it contains the advertised number of active ingredients.

“Most people will lose one pound a week with our product,” said Mamelona. “We need to educate people that losing weight too fast is not healthy. It’s best to lose weight slowly but surely and then make adjustments in your habits so you don’t gain weight again.”

He said OceanSlim works by helping eliminate stored fat, preventing the accumulation of new fat and helping control the appetite.

Mamelona arrived in Canada in 1997, after gaining a scholarship from the Canadian International Development Agency to study at Université du Québec at Rimouski, where he obtained his PhD in Marine biochemistry.

He said he finds New Brunswick a good place to build a startup.

“New Brunswick is a small province, it’s easy to get to see people from ACOA, or the Department of Fisheries. Compared with Quebec, there’s more direct access,” said Mamelona who previously researched developing marine natural health supplements at Institut des Sciences de la Mer de Rimouski. He was also an assistant professor in the Department of Biology of Université de Moncton.

To date, Biomolecules for Life has been financed by provincial and federal funding and money from a private investor. The team may need to fundraise in a few months to facilitate growth.

The partners, who work with businessman Eric Brion, who is Denis’ father and the company president, have recently improved their website, with the aim of answering consumers’ questions and establishing the scientific validity of their product.

OceanSlim took about three years to develop. For the time being, the product is only available from the company’s site. Mamelona said he believes there is no similar product on the market, but there are so many weight-loss aids he can’t be sure.

He said that although Health Canada has approved Oceanslim, it should not be taken by breastfeeding mothers, and anyone taking other medications should consult with their doctor in order to avoid possibly harmful drug interactions.

The partners now intend to start work on a second product intended to boost health and immunity. Mamelona said Health Canada has already granted approval for the second product.

The company eventually aims to break into the global market, but Mamelona said there is a lot to be done first in terms of product and market development.

OceanSlim is a good start, he feels.

“This is a dream come true,” he said. “Since I was young in my country, fishing in the Mozambique Channel, I’ve been interested in the health benefits offered by the marine world, and dreamed about one day developing a drug.”