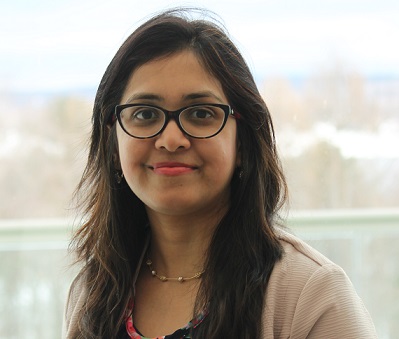 When the national research organization Mitacs named 150 leading Canadian researchers in December, one name on the list was Tanzina Huq, the CTO of Fredericton natural preservative company Chinova Bioworks.

Huq is a postdoctoral fellow in Chemical Engineering at University of New Brunswick. Her research into drawing the multi-purpose compound chitosan from mushrooms is the foundation for Chinova, one of the region’s leading new biotech companies.

Having participated in at least four accelerators in three countries, Chinova is using chitosan in an anti-microbial agent, which it will employ in a natural preservative in such foods as juices. Chinova has developed three off-the-shelf formulations, which will launch later this spring. It is also working with producers to develop customized formulations for specific food and beverage applications.

Huq, a biomaterials and polymer scientist originally from Bangladesh, said consumers want more transparency in food ingredients and Chinova is working with producers on natural preservatives that satisfy health concerns and prevent food from spoiling too quickly.

“Producers have to ensure food safety, shelf-life and maintain the overall quality of the product while giving consumers natural, healthy, transparent ingredients,” said Huq. “However, natural preservatives in the marketplace are not able to deliver. This is what drives Chinova's research.”

Huq is working with her Chinova Co-Founders Natasha Dhayagude and David Brown to get these preservatives to market. But she is also continuing her research at UNB. Mitacs, which supports research and commercialization at universities across the country, named her to its list of 150 notable researchers across the country, which it produced to celebrate Canada’s 150th birthday. (Last year, Brown was also recognized nationally when he was one of six recipients of the 2017 Governor General’s Innovation Awards.)

Picomole is Back and Conducting Tests

Huq’s work focuses on chitosan, a compound with a range of medical and industrial applications that is traditionally extracted from the discarded shells of shellfish. Mycodev Group – the company Chinova was spun out of two years ago – has worked for years at producing chitosan from fungal sources, and now Chinova is using the substance in food production.

“Our product can either be broad-spectrum or customized to fit the needs of each individual food and beverage producers microbial issues,” said Huq. “Chinova's mission is to replace artificial preservatives with our natural clean label products across many different industries and get as many companies to join us in the clean label movement.”

Chinova has received funding from the New Brunswick Innovation Foundation ($100,000 as of March 2017) and from the First Angel Network. The company recently joined the Fierce Founders Bootcamp, a program for Canadian female-led startups at Communitech in Kitchener, Ont. And it has participated in three international programs – RebelBio in Ireland, Terra in San Francisco and Plug and Play in Sunnyvale, Calif. These last three programs are specific to the foodtech/biotech industry that Chinova fits into.

“These programs offer a lot of support to startups, like their extensive network, amazing mentors very specific to our industry, access to potential clients and investors,” said Huq. “All these factors help create a very strong support system for Chinova to continue to expand and scale.”