Love, Marriage and a FinTech App 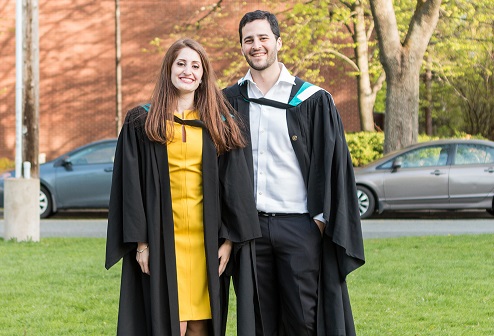 In honour of Valentine’s Day, we have a story today of love, marriage, an accelerator in Cairo and an intriguing FinTech app.

This is the story of Syrian-born Amira AlKasem and Mohamad Tawakol, originally from Egypt, two young people who met at Dalhousie University, where they were studying business and computer science respectively. I met them last year when they were going through Starting Lean, the university’s entrepreneurship program.

As you may have guessed, they’re now engaged and plan to marry later this year in Cairo, where Tawakol hails from.

Cairo features prominently in this story because Tawakol was recently accepted as one of 20 startups in the current cohort of the tech accelerator at the American University of Cairo, the largest private university in Egypt.

He and his co-founder Mohamed Zohair are taking their company Spare through the program’s FinTech cohort. Tawakol actually has found he is helping many of his colleagues in the program, because the course involves the lean methodology he’d already learned at Dal.

Spare is a payment system that aims to cure a massive problem for consumers in Egypt, and it could have applications in other developing economies.

Because of the costs, fewer than 10 percent of Egyptians have bank accounts, and about 4 to 6 percent have credit cards. That means 95 percent of all transactions are cash-based – even online. Merchants often don’t have the cash to give people the proper change.

“People always pay in cash, and merchants are always saying things like, `Do you want a pick of gum instead of your change?’” said Tawakol. “It’s known as the change crisis.”

Spare aims to solve this problem with an app that allows consumers to store points on their phones, which can then be used to pay for goods at approved store outlets. Each point is equal to one Egyptian pound.

Consumers can download points from tablet that Spare provides for the merchants. Because the system is points-based rather than using the country’s currency, it avoids regulatory problems that could entangle a payment system. Commercial International Bank, the biggest bank in Egypt, sponsors the accelerator, and officials from the bank have helped Tawakol and Zohair on the legal matters.

“It’s like cashback in reverse,” said Tawakol. “You give the store cash and they load up your phone.”

Tawakol and Zohair plan to launch the service with  the merchants at the university. By six months after that, they hope to have the tablets in at least 100 stores, and then move into national chains.

They believe there is an international market for the product.

“Right now, it’s just Egypt because that’s the market we know,” he said. “There’s a really big need for electronic payments and no one has found a mobile app solution.”

Meanwhile, Tawakol and AlKasem are also busy planning their nuptial celebrations. He has returned to Halifax for two weeks, where AlKasem is working for a bank. They’re planning an engagement party in Beiruit this summer, as her family members in Syria can travel to Lebanon but not Egypt.  They are planning a wedding in December, and will be a married couple by the next Valentine’s Day.