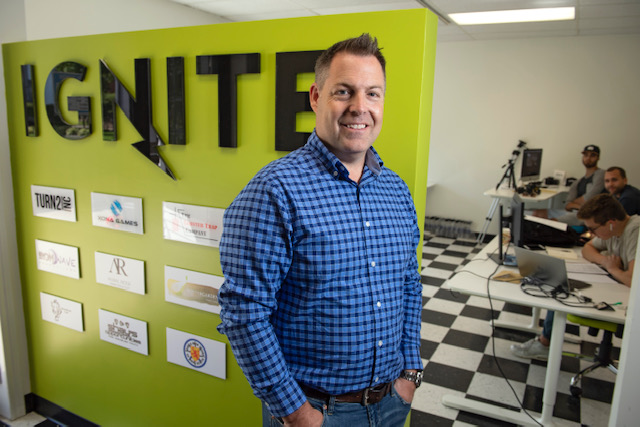 As improbable as it sounds, Doug Jones has turned a love of sports into a licencing business, then into an innovation hub in Yarmouth and then into an entrepreneurship network for rural Nova Scotia.

Jones is the CEO of Ignite Labs, the innovation hub that he established in Yarmouth to foster entrepreneurship in Nova Scotia’s southwesterly town. Not only has it nurtured a range of companies that are drawing plaudits in startup circles, but the Ignite franchise has expanded into northern Nova Scotia with the opening of its Stellarton facility in October.

The project has been so successful that Alastair Trower, the head of business development at Halifax-based engineering firm Enginuity, speaks of “the Ignite model” of building a business. He describes it as identifying entrepreneurial ideas that could fly and “wrapping all the support they need around them” to foster growth.

In a phone interview from Yarmouth, Jones said the goal of ignite is to provide physical space and community support for entrepreneurs, and to provide an interface with industry so innovation can be brought to the market.

“In a lot of ways, it opened some people’s eyes,” said Jones, noting that the industry in Yarmouth is mainly the fishery, especially the lobster fishery, which has been lucrative recently. “Now they’re starting to realize that this industry is ripe for innovation.”

The story on Ignite began with Jones’ success with his company Turn2 Innovations, which is dedicated to innovations in sports equipment. An all-round athlete who ended up as a hockey scout, Jones began to come up with improvements to sports equipment that he licenced to sports manufacturers. His innovations have been adopted by such equipment makers as Wilson and Louisville Slugger.

A few years ago, Jones found himself at an event talking to Jeff Mullen, the director of enterprise development at the Atlantic Canada Opportunities Agency, who proposed an innovation hub in Yarmouth.

That led to the creation of Ignite Labs, a facility that gives entrepreneurs the tools they need for their businesses. These supports range from the basic tools for prototyping (like 3D printers and CNC machines) to a sound studio, video equipment and drones.

Ignite opened in June 2018, four months after the federal government announced one of its new innovation superclusters would be the oceantech group in Atlantic Canada. The growth of ocean-technology in the region has helped provide support for some of Ignite’s leading ventures, which have benefited from the organization’s partnerships.

For example, The Lobster Trap Company, which is producing a more robust lobster trap than what’s now on the market, worked on its prototyping with Enginuity and worked out of COVE in Dartmouth. And BlackWatch.Tech, which makes next-generation man-overboard equipment, has received support from Innovacorp’s Blue-Green competition, the Spark competition, and Volta Cohort.

In September, the Ignite franchise expanded with the opening of the Ignite facility in Stellarton to serve central and northern Nova Scotia. Jones said the new facility is making headway and has developed a strong relationship with the entrepreneurial community at St. Francis Xavier University. It’s an important relationship because it brings the research capacity that is often missing in rural innovation facilities.

Asked if he was now planning to dot the map with more Ignite outposts, Jones said the priority is simply to support growing companies.