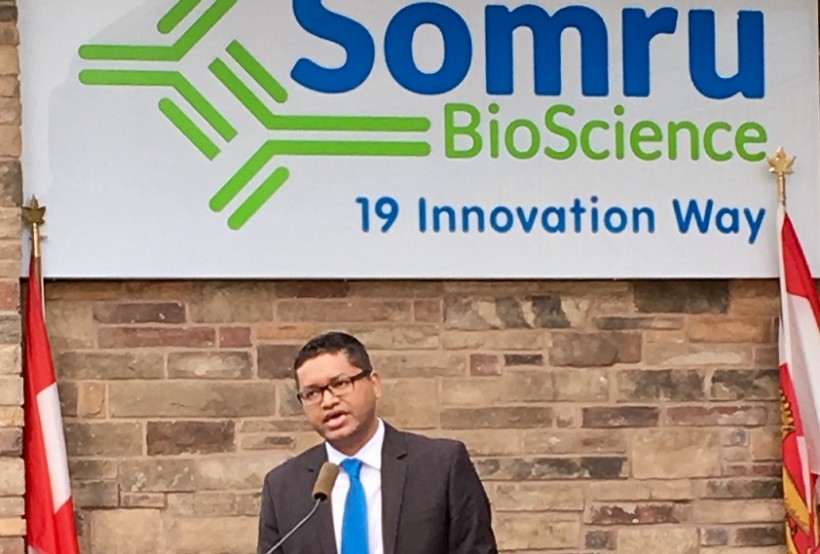 Mohammed Moin at the funding announcement on Wednesday.

Charlottetown-based Somru BioScience on Wednesday announced it is receiving loans and grants totaling more than $4.4 million from the federal and P.E.I. governments.

The company, which is developing a range of products centred around antibody technology for research, diagnostic and clinical applications, told Entrevestor last month it was in the process of raising $7 million. Co-Founder Mohammed Moin said it had commitments from several public bodies as part of that funding round.

“Prince Edward Island has a progressive and fast-growing bioscience sector and Somru BioScience is a leading force in that community,” said Charlottetown MP Sean Casey in a statement announcing the funding. “Somru’s products have attracted interest and attention from around the world and their success – in research and development, economic growth and job creation, and exports – is P.E.I.’s success.”

BC Exit Highlights the Growth of PEI's BioScience Ecosystem

The lion’s share of the funding is a $3 million provisional loan issued through the Atlantic Innovation Fund, a fund for major R&D projects operated by the Atlantic Canada Opportunities Agency. The company will also receive a grant of as much as $257,752 from the National Research Council’s Industrial Research Assistance Program, or IRAP.

Somru BioScience was founded in 2012 by two couples: Moin, his wife Dihan Ahsan; and husband and wife Rafiq and Clarinda Islam. The company is focused on developing breakthrough antibody technology for research, diagnostic and therapeutic applications.

The money will be used for R&D in such Somru products as Intelli.b, a software solution that helps drug developers generate a fingerprint-like analysis of a novel drug candidate.

“The intelligent 3D fingerprint technology . . . currently under development by Somru will help our clients reduce significant costs in biosimilar drug development,” said Moin. “We look forward to advancing Intelli.b thanks to support from ACOA, IPEI and IRAP.”

Last September, Somru moved into a 5,000-square-foot office space in Charlottetown. Moin hopes to double his workforce by the end of the year, bringing the number of staff in its three Charlottetown facilities to around 40 people.

The company serves more than 70 clients across 23 countries and is projected to earn $1.5 million in revenue in the next fiscal year.

“Opening the new research laboratory facility is a major milestone for Somru,” said Islam. “This accomplishment allows us to accelerate our R&D activities while continuing to provide comprehensive and innovative bioanalytical solutions to our clients.”