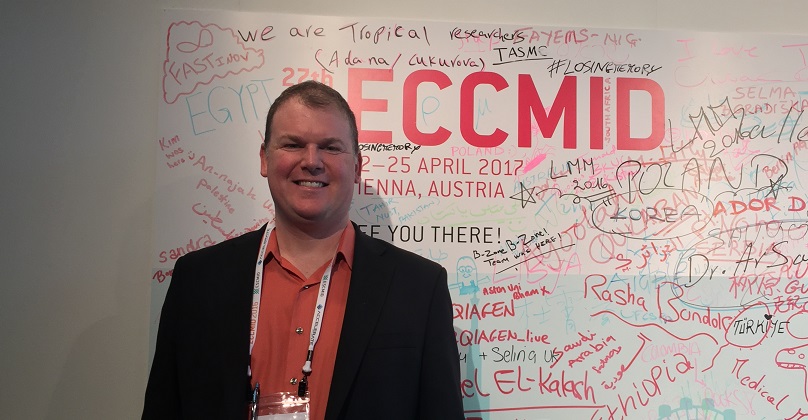 Kevin Sullivan at the recent ECCMID Conference in Vienna

After growing quietly for several months, Appili Therapeutics Inc. of Halifax announced Tuesday it has received a key U.S. regulatory designation for a drug that treats Clostridium difficile infection, or CDI, in children.

The company said in a statement the Food and Drug Administration has granted orphan drug designation to its drug candidate ATI-1501. This medicine removes the bitter taste from a long-standing drug so that children are more willing to take it, thereby improving its effectiveness.

It is the latest step for a young company that has created excitement in the region’s biotech community. Appili was formed last year when CEO Kevin Sullivan, one of the most experienced biotech execs in the region, partnered with Bloom Burton & Co., a Toronto investment bank specializing in healthcare. Together, they formed a company to identify promising drug candidates and take them to development, including ATI-1501.

“In just three months, we received orphan drug designation from the FDA,” said Sullivan in a statement. “Having this quick turnaround is an indication of the high quality of the regulatory team we have built, and an important step on our path to becoming the first company to offer an approved treatment for C. difficile designed specifically for children affected by this serious infection.”

Sullivan came to Halifax in 2013 as CEO of the drug discovery company DeNovaMed after spending 10 years (including four as COO) with London, Ont.-based Viron Therapeutics Inc., which was developing a cardiovascular drug. The company raised more than $35 million in equity and non-dilutive capital and took its lead product through Phase 2 trials.

Last year, Sullivan left DeNovaMed and linked up with Brian Bloom and Jolyon Burton, who he’d known for years. They agreed to launch a company targeting treatments for infectious diseases and Appili was born. The company is in the process of closing a round of seed financing and is developing two drug candidates: ATI-1501 for CDI, and ATI-1503, an antibiotic that could fight deadly infections such as Klebsiella pneumonia. Appili has hired six PhDs and plans to hire another three in the coming month. Seven of them will be based in Halifax.

Appili applied for and quickly received orphan drug status for the first drug. The designation grants the company reduced FDA application and administration fees, tax credits for clinical research in the U.S. and seven years of marketing exclusivity. The company hopes to take its CDI drug into clinical trials next year.

The FDA granted the application because CDI is one of the U.S. Centers for Disease Control’s most urgent antibiotic-resistant bacterial threats. It affects more than 500,000 Canadians and Americans each year and causes 29,000 deaths annually.

A drug called Metronidazole has been used to treat the condition since the 1970s, but kids don’t want to take it because of its dreadful taste. Like something out of Mary Poppins, API-1501 masks the bitter taste making children more likely to take their medicine.

“We teamed up with formulation experts to reformulate and taste-mask the bitterness of Metronidazole,” Sullivan said in an email from Amsterdam, where he is attending a conference. “This orphan application is one of the first steps in our regulatory strategy, which will take the product into human clinical testing and subsequently to approval.”