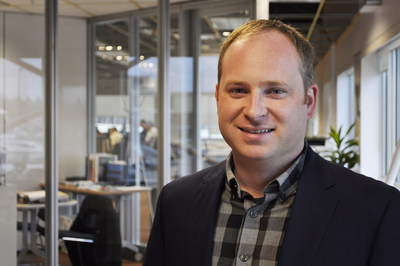 Scott Everett: Used to getting on a plane and going to customers.

Six years after he began dabbling in the Internet of Things space, Scott Everett is pushing his company Eigen Innovations aggressively into the automotive sector and courting investors.

Everett is the CEO of Fredericton-based Eigen, which in the past few years has established itself as one of the leading Industrial Internet of Things, or IIoT, companies in the region. The company uses artificial intelligence to help machines manage large amounts of data and improve their productivity.

Eigen began a few years ago to gain traction in the food-services business and has been gaining clients more recently in the automotive space – so much so that it now has an office in Windsor, Ont., just across the border from Detroit.

“There’s not a lot of clients in this space in New Brunswick so we’ve got used to jumping on a plane and going out to where the customers are,” Everett said at a reception in Halifax on Thursday night, when he was recognized as one of three Atlantic Canadian nominees for the Manning Awards.

Everett, along with the senior team at Dartmouth-based Spring Loaded Technology, and Mark Wood of Great Village, NS-based Ocean Sonics, will vie for prizes worth as much as $100,000 at the Manning Awards finals in November.

Eigen got its start at the University of New Brunswick when a team of researchers began working on algorithms the could help manufacturers improve production efficiency and reduce waste. They were working under the guidance of professor and co-founder Rickey Dubay, who still sits on the company’s board.

As they developed their systems, they saw the commercial potential and thought of striking partnerships with corporate partners. Chris Mathis, then the CEO of university commercialization agency Springboard Atlantic, suggested they start their own company to develop a product. Soon, Everett was meeting with manufacturers in New Brunswick and learning how the Eigen algorithms could help them.

“We got engaged with the industrial companies in the area and it was a matter of being on the factory floors and seeing all the common problems that these companies shared,” said Everett.

After it graduated from a Propel ICT accelerator, Eigen gained early traction by working on a system that included heat-sensitive cameras to ensure food processing companies were using the right heat to cook food.

As it grew, it accrued a string of accolades. In late 2015, Eigen placed third at the Cisco Grand Innovation Challenge in Dubai, and shortly afterward raised $1.4 million in funding. In 2016, the company entered the Creative Destruction Lab in Toronto, becoming one of the companies to graduate from the program. It was an important period for Eigen because it was the first time it was working with a range of people who understood AI.

“The value of a program like CDL is you get in the room with people who don’t think you’re crazy and can say, ‘I get it and you should go see this friend of mine.’”

The experience in Toronto led to relationships with manufacturers in the auto industry, both large auto-makers and original equipment manufacturers. Today, the automotive and food sectors are the two main target markets for Eigen.

The company has doubled its staff to 25 people in the past year and Everett believes it could double again in the coming year. He is now raising capital, and the company wants to do more work in educating its clients’ workers to enhance machines’ ability to learn.

“We hear a lot about machines being able to learn,” he said. “But to learn better, sometimes you need a better teacher.”