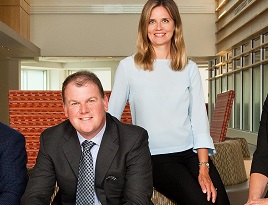 Buoyed by positive results in recent clinical trials, Appili Therapeutics is considering a listing on the Toronto Stock Exchange.

The Halifax-based drug discovery company has been conducting clinical trials on its first drug candidate, ATI-1501, and released a statement today saying the tests produced the results it was hoping for. “It couldn’t have gone any better,” said Vice-President of Drug Development Jamie Doran in an interview.

What that means is that Appili expects to submit the results of the test to the Food and Drug Administration in the U.S. later this year. The FDA customarily takes nine to 12 months to review such filings, so Appili is hoping that it will receive approval and have a product on the market by early 2020.

With the company gaining momentum, CEO Kevin Sullivan will soon go out to raise more capital and is talking to his bankers about seeking a public listing in Toronto.

“We expect that we’ll put out guidance on that in early fall,” said Sullivan. “We think that makes sense in terms of our life cycle. We are transaction-focused and we see a number of opportunities on the horizon. We want to be able to act promptly on them.”

Just over two years old, Appili has been working on a two-track strategy to get to market. Last year, it was allowed a fast-track regulatory process for ATI-1501, because the compound is based on a drug called metronidazole that had already been approved. Meanwhile, it is also working on a second compound, ATI-1503, which will take longer to develop but aims for a larger market in addressing antibiotic-resistant viruses.

Last October, the company began clinical trials on ATI-1501 to establish the drug is safe for human consumption and does what Appili says it would. The company carried out tests on 44 adults, which produced “positive top-line results”.

ATI-1501 addresses two problems with metronidazole. First, the existing drug is only available in a solid form, which means that seniors who have trouble swallowing can only take it if it’s ground up and mixed with something like apple sauce. Second, metronidazole tastes terrible, which dissuades patients, especially children, from taking it. ATI-1501 can come in a liquid form and doesn’t have metronidazole’s bitter taste.

“We are currently pursuing commercial manufacturing activities to support an NDA [New Drug Application] filing in the first quarter of 2019,” said Sullivan. “In addition, we are actively engaged in commercialization and licensing activities to maximize patient access to ATI-1501 in U.S. and global markets.”

Sullivan, who has raised a total of $11.8 million since founding the company, said he’s a month or two from beginning his next round of fundraising, which will likely have a target of at least $5 million. He is also talking to the company’s backers and investment bankers about whether and how to seek a public listing. The big question is whether to do a full-blown initial public offering or to gain a listing as a capital pool company, which enters the Venture Exchange through a reverse takeover with the listed shell company.