The Dartmouth cleantech company has drawn investment from a "dream team" of tech companies and property developers. 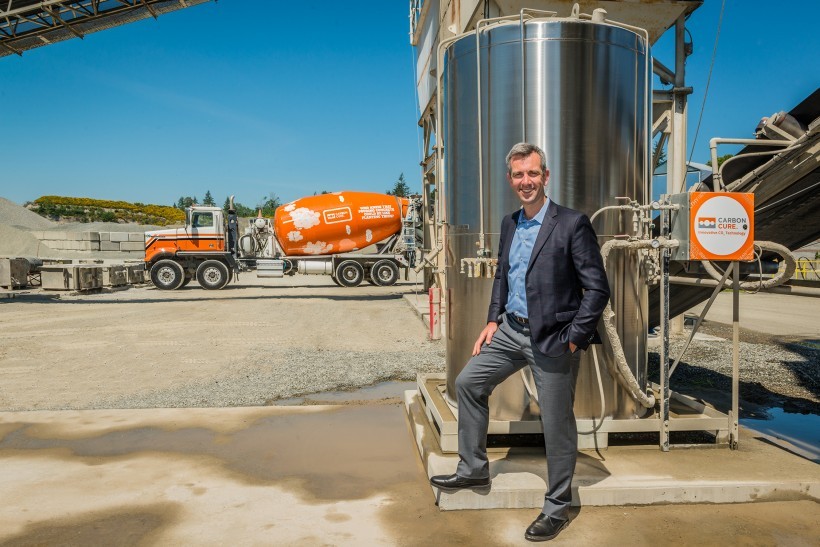 CarbonCure CEO Robert Niven: 'We wanted the very best investors, and this is the best we could ever dream of.'

Dartmouth-based CarbonCure Technologies has raised a fresh round of funding led by Amazon and Breakthrough Energy Ventures, and CEO Robert Niven believes it’s the biggest cleantech financing round in Canada this year.

The announcement of the major funding round came the day after Ottawa-based eCommerce giant Shopify said its $5 billion Sustainability Fund would purchase carbon offsets from CarbonCure to encourage green industrial practices.

Amazon said Thursday morning that CarbonCure and four other companies would be the first cleantech companies to receive investments from its US$2 billion green venture capital fund. It previously announced the fund as part of its Climate Pledge, the 2019 promise to become carbon-neutral by 2040.

CarbonCure did not reveal how much it had raised, but said the investment came from a syndicate that comprised Amazon’s Climate Pledge Fund, Breakthrough, Microsoft, BDC Capital, 2150, Thistledown Capital, Taronga Ventures, and GreenSoil Investments. Breakthrough, an impact fund backed by such multibillionaires as Michael Bloomberg and Bill Gates, first invested in CarbonCure in September 2018.

“Our round was three to five times over-subscribed so we just picked the dream-team investors, mainly tech firms and large property developers,” said Niven in an interview. “We wanted the very best investors, and this is the best we could ever dream of.”

Concrete is the second most abundant man-made material in the world, and cement, its key ingredient, is responsible for an estimated 7 percent of global carbon dioxide emissions. CarbonCure cures concrete by injecting CO2 into it, which produces a stronger concrete while reducing carbon emissions. Its goal is to prevent 500 megatonnes of CO₂ emissions from entering the atmosphere every year by 2030.

In the interview, Niven said tech giants like Amazon, Microsoft and Shopify are becoming increasingly important to companies like CarbonCure that are dedicated to the growing field of carbon removal. These tech companies, each with a multi-billion-dollar balance sheet, have pledged to become carbon neutral by 2040.

Amazon, for example, is becoming one of CarbonCure’s premiere customers, using the Nova Scotian company’s technology to ensure its building program adheres to green construction guidelines. The ecommerce giant will open 100 new buildings this month alone. “Amazon is already our largest customer in terms of purchasing concrete,” said Niven. “Amazon is a prolific builder.”

The prolific growth of carbon offsets by tech giants can be used to encourage industrial companies to change their processes, said Niven. This is especially beneficial in emerging economies, where many companies haven’t had a lot of exposure to the latest building technology.

CarbonCure is already used by nearly 300 concrete producers to supply its green concrete to construction projects around the world. That’s up from 126 in January 2019. The company now employs about 60 people, up from 25 about two years ago.

“This round of investment is going to drive that same rate of growth,” said Niven. “It’s jet fuel for our continuing expansion and the development of new products.”