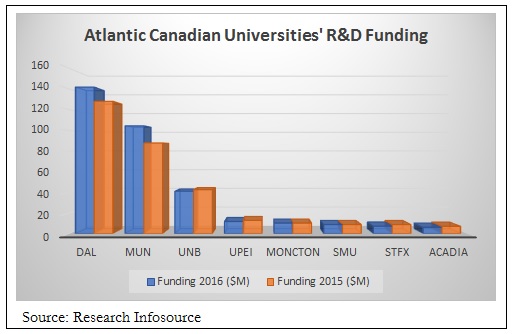 To learn where R&D spending is rising or falling, visit our Facebook page.

As we look ahead to the second half of 2017, there is one institution in the startup community to keep an eye on in the next 6-12 months, as it has the potential to change the landscape. That institution is Dalhousie University.

The region’s startup community is maturing and includes more companies than ever. At its core is a group of scaling companies that are gaining more and more international clients. Its biggest members book tens of millions in annual revenues.

The question now is how to keep it growing. That doesn’t just mean creating more companies. It means creating companies whose products can truly disrupt markets, and that often requires deep scientific research. It also means we need to create the ecosystem needed to nurture these scaling companies.

What happens at Dal in the next year or so will have more impact than anything else on developing that ecosystem. That’s so because (a) Dal is the region’s leading research institution, (b) the next stage of startup growth will need a greater emphasis on commercializing scientific research, and (c) Dal is at a crossroads with its innovation program.

Entrevestor’s research in 2014 and 2015 showed that startups affiliated with universities gain revenue at twice the pace of the overall startup population — a stat that highlights the importance of university research in developing products that disrupt markets. (Disclaimer: Dalhousie is a client of Entrevestor.)

More R&D is conducted at Dal than any other Atlantic Canadian university. According to Research Infosource, Dalhousie was the No. 16 research university in Canada in 2016, accounting for $141.9 million in R&D. (Memorial University of Newfoundland was No. 19 with $102.4 million and the University of New Brunswick No. 27 with $41 million.)

With that wealth of scientific research, Dal is facing a few opportunities to up its game in innovation. The university is a partner in the Creative Destruction Lab’s new CDL-Atlantic node in Halifax. That program has been announced and will tie the university into a network of the country’s best mentors.

Meanwhile, there’s also an effort to make Dalhousie the first Canadian node of Innovation Corps, or I-Corps, the U.S. National Science Foundation’s program for commercializing scientific research. I-Corps specializes in teaching scientists how to commercialize their research, and in the past few years has worked with 1,500 of the leading scientists in the U.S.

So by the end of the year, our largest research institution could be affiliated with CDL and its network across Canada, as well as I-Corps and its links across the U.S. They could work with other startup groups in or around Dal, like Launch Dal, ShiftKey Labs and the IDEA Project. Through Springboard Atlantic, the group that co-ordinates the commercialization of Atlantic Canadian university research, other institutions in the region should also benefit from this advance. It could be an integrated ecosystem, bringing in new companies and helping maturing companies to grow.

There are still some hurdles to clear to make all this happen. Dalhousie needs to do a better job of spinning its research into companies — UNB, for example, has a more co-ordinated approach to developing research into companies. Dalhousie has been in the news recently because it is not renewing the contract of entrepreneurship professor Ed Leach. It has to get beyond the bad feelings created by that move.

And yet, Dalhousie has the opportunity to be the linchpin in something special — a layered ecosystem with scientific research and its core, and whose connections reach across the continent.

For the raw data from the chart above, including the percentage changes, please visit our Facebook page. Just click here.