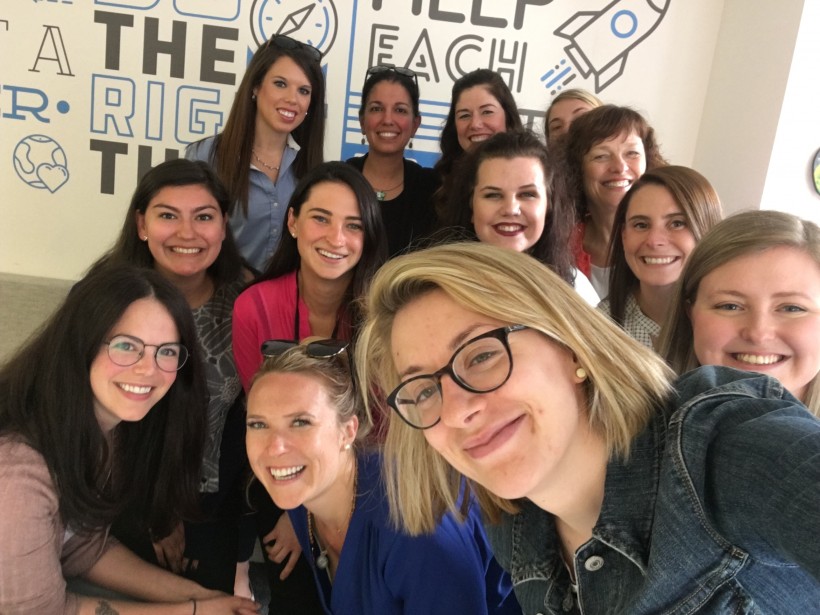 Sarah Murphy (Bottom row, second from left) and other female entrepreneurs in St. John's in 2018.

A trio of Atlantic Canadian entrepreneurs is encouraging technology companies and funding organizations to sign a pledge aimed at increasing the number of women working in the sector.

Sarah Murphy, Maddie Coombes and Chris Gardner are the creators of the 12-step Gender Diversity Pledge, which is designed to produce measurable progress towards workplace equality. It asks signatories to commit to making their workforces at least 30 percent female within two years.

Murphy is a podcaster and former executive at Halifax-based construction AI firm Harbr. Coombes is a human resources specialist at gene sequencing startup Sequence Bio of St. John’s, and Gardner is Sequence’s CEO. Although all three founders are based in Atlantic Canada, they hope that the pledge will have a national, or even global impact.

“Really what this pledge represents is a collection of resources and best practices across the industry,” said Murphy in an interview. “The pledge is entirely tactical. It's literally 12 steps that companies can take of how to increase workforce diversity. And some of the steps are very easy.”

She and her colleagues were inspired to create the pledge because, despite major technology firms frequently highlighting progressive workplace initiatives, the actual stats surrounding women in STEM fields have been slow to change.

Enterprise software and cloud-computing giant Salesforce, for example, conducted an internal audit that found substantial pay disparities in 2015. Salesforce spent US$3 million to close the gap, only to find that it had reopened a year later.

“Inherently, people believe in diversity, but nothing happens over time,” Murphy said. “And you see this especially in [Silicon] Valley, long-term.”

The pledge is the product of about a year and a half of research and development, relying on a combination of academic work and real-world data—a process that was helped along by St. John’s-based venture capital firm Killick Capital, which has already circulated the pledge among its portfolio companies.

Many of the 12 steps are designed to be easy and quick for companies to implement, with the goal of producing meaningful changes almost immediately.

Step one, for example, is simply for a company’s CEO to publicly state their support of gender diversity, and for the company to circulate that statement of support within the organization.

“We have truly designed the pledge to be something that can suit a company at any stage,” said Murphy. “Creating diverse companies takes time, but we've set up steps so that this is something any business can do.”

The economic benefits to employers that hire more female employees can be considerable. A 2017 study by McKinsey & Company found that “advancing women’s equality in Canada” has the potential to increase annual GDP growth by as much as 0.6 percent. That could translate into about a $150 billion increase in GDP by 2026.

Toronto startup hub MaRS noted in 2018 that companies that hire diverse workforces have access to higher numbers of qualified job candidates. And a 2015 study in the Journal of Applied Psychology found that the top 25 percent of companies in terms of gender diversity produce financial returns that are an average of 15 percent better than the industry median.

Murphy said this is particularly relevant in Atlantic Canada, where high-tech employers have warned that they are struggling to find enough skilled workers.

“In Atlantic Canada, we don’t have enough people to ignore half the population,” she said. “Beyond just being socially good, [gender diversity] makes for better companies. It makes good business sense.”