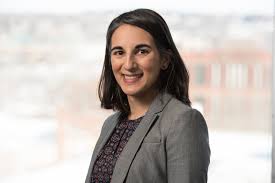 Bethany Deshpande: 'Over the next six months, our algorithms will get better and better.'

SomaDetect, an AgTech company that launched in Fredericton two years ago, has begun installations of its Version 2 in-line milk monitoring system at Cornell University, marking the beginning of its early adopter program.

The company, which is now based in Buffalo, NY, and Fredericton, said in a statement this week that the early adopter installation at Ithica, NY-based Cornell is a key step in the roll-out of its product. The company is planning a total of 28 installations at farms in the next four months.

SomaDetect provides dairy farms with hardware and software that can scan a cow’s milk and provide instant data regarding the cow's health. Currently, farmers rely on monthly data to make management decisions. With SomaDetect, farmers have access to daily measurements for every cow.

“We have successfully manufactured our first sensors at scale and are excited to be installing them on 28 dairy farms across New York, Ontario and Atlantic Canada,” said CEO Bethany Deshpande in the statement. “Over the next six months, our algorithms will get better and better, and we will be working to maximize the value and benefits of this technology for our dairy farmers.”

Deshpande is now working on a major funding round and has closed investments from a few parties. Last month, SomaDetect revealed an undisclosed amount of funding from the Dairy Farmers of America, cementing a partnership with a group that represents almost 15,000 dairy farmers.

The company in June said it had received an investment of $250,000 from the New Brunswick Innovation Foundation. Deshpande said it has also received investment from Igan Partners of Toronto and she is in talks with a few other funders.

SomaDetect is now based in Fredericton and Buffalo as a result of the company winning US$1 million after being judged the top startup in the Buffalo-based 43North accelerator’s 2017 cohort. Deshpande said in October the company will grow to 21 employees by the end of the year, about half of them in Canada.