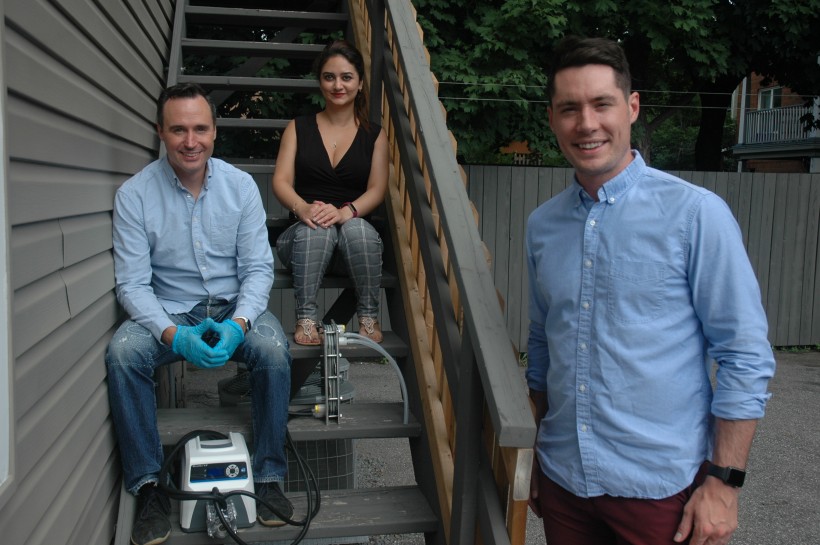 Planetary Hydrogen, which plans to capture carbon in the world’s oceans, claimed the $2,000 first prize at the annual Start-Up Yard Pitching Event on Thursday.

Start-Up Yard, Innovacorp’s oceantech hub on the Dartmouth waterfront, brought together nine early-stage entrepreneurs to pitch their companies, and presented Planetary Hydrogen with the top award.

The cleantech company, which recently moved most of its operations from Ottawa to Halifax, has devised a system that has two market-oriented components that benefit the environment. First, it produces hydrogen, which is growing in demand as a clean fuel. Second, it injects bicarbonate into the ocean to reduce the acidity of the water and capture carbon.

Innovacorp Vice-President of Investment Andrew Ray said Planterary Hydrogen’s solution “really connects with two of the big challenges in the world – clean energy and clean oceans, and it does it in a way that is financially attractive.”

Read our Recent Report on Planetary Hydrogen Moving to Halifax.

For example, the $1,000 second prize went to Glas Ocean Electric, which makes work boats that use electric propulsion and is developing dual-purpose boat batteries so they can store dynamic energy. The team, led by CEO Sue Molloy, showed its ability to execute by launching its first boat this summer, in spite of the pandemic.

Glas Ocean, which plans to launch four more boats in the coming year, also won the $2,000 award for the company that aligns best with the UN’s goals for sustainable development.

Sedna Technologies took home the third-place prize, which was also worth $1,000. Sedna’s suite of tools helps to automate the seafood supply chain, which is still dominated by companies that rely on paper records. The company has gained 150 clients in the past year for its product, which offers traceability, real time reporting and data analytics.

Here are the other companies in the pitching event (and links to recent articles on two of them):

Copsys Industries – Copsys has developed a “corrosion management system” for ships’ hulls and underwater infrastructure. It features a coating that halts the corrosion of metal and prevents the buildup of such pests as barnacles. The coating works in conjunction with a micro-processor that can detect corrosion-prone areas and address them before the corrosion has even begun.

Kavacha.ca – The company from Canoe Cove, PEI, makes direct-to-metal coatings from fish waste that can protect marine vessels and structures in harsh environments. Its solution saves users more than 30 percent on material and labour, while increasing or maintaining asset lifetime and reducing toxin exposure.

Mabel Systems – Formerly called Tracker Inventory Systems, this company based in Sydney, helps ventures in such segments as seafood, aquaculture and agriculture keep track of their inventory as it proceeds to market. The camera-based system needs no manual input from workers on the plant floor.

Mabel Is Seaching for Beta-Testers

Resqunit Canada – The North American subsidiary of Norway’s Resqunit A/S offers a floatation device that can be attached to lobster traps and other equipment to ensure these traps are not lost on the ocean floor. The company has sold 15,000 units in the last two years and plans to launch its second version within months.

MacDonald Hallett Oceans Protection Engineering Group – The company is designing a new system that makes it easier and safer to tow ships in distress, even those that have been abandoned by their crew.

SeaChange BioChemistry, Sabrena MacKenzie. The SeaChange founders discovered and are commercializing a process to extract chemicals from kelp, and to provide commercial quantities of these chemicals at lower costs and a smaller environmental footprint than their competitors.