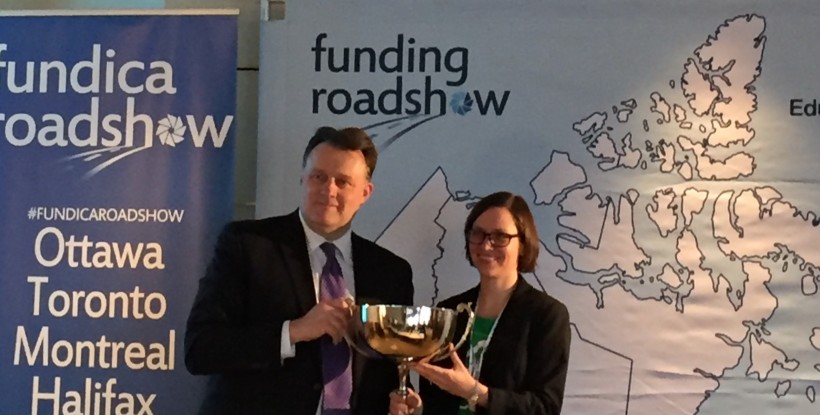 PACTA, the Halifax company whose technology helps to manage contracts, won the Atlantic Canadian stop in the Fundica Roadshow on Friday, securing a trip to and office space in Silicon Valley.

The Fundica Roadshow goes across the country, hearing pitches and rewarding the top pitching company in each city with a return trip to Silicon Valley, a Quickbooks subscription and a cloud hosting package from CANARIE and SoftLayer.  The prize also includes three months of office space in Silicon Valley.

In the three years that the Fundica Roadshow has stopped in Halifax, a woman has won the top prize. This year was no exception: Charlotte Rydlund, CEO and Co-Founder of PACTA, took home the prize.

Rydlund worked at Proctor & Gamble in senior management and noticed that she and her colleagues found it difficult to keep track of contracts between departments and with other companies.

PACTA solves this problem by storing and monitoring the contracts. It automatically searches for events outside the company to flag the users about parts of a contract that could be affected by news, such as recalls. PACTA also reminds the users that an action in the contract will soon be due so that they can fulfill it on time.

The two-year-old company has raised $300,000 in its first seed round. Rydlund was asking for $800,000 at the Roadshow for product development and customer acquisition. With six customers currently using PACTA, Rydlund wants to bring the company to the rest of the $15.9 billion management market.

“We need to put ourselves on the map, but the only way to make relationships down there [in Silicon Valley] is to be down there,” Rydlund said.

The other companies who pitched at Fundica Roadshow included: Lootbag, a platform that sends you free products in return for feedback; SimpTek, a platform that uses data analytics to help electric utility companies better understand and predict their customers’ energy use; BuyMyLemonade, an e-commerce and e-learning platform for kids, which helps them sell their toys; Orpheus Interactive, a narrative video game company; and Fundmetric, a platform that uses big data to help charities raise more money.

Lootbag Aims to Build Up User Base

The judges assessed the companies on their market potential, solution, team, pitch and readiness for Silicon Valley. Judges came from the First Angel Network, Futurpreneur, Innovacorp and the Business Development Bank of Canada.

Even though the judges picked the company that won the big prizes, audience members got to vote on the Roadees’ Choice Awards: Best Pitch. The audience voted via text for Fundmetric. CEO and Co-Founder Mark Hobbs delivered a fun and laid-back pitch for his company, which is creating the “first transformational change in 20 years” to the charity business. Fundmetric works with Dalhousie University, St. Mary’s University and Valley Regional Hospital. The platform shows them information and patterns of their current donors so that they can find other potential donors.

The Roadshow also featured presentations in the morning about pitching, payroll and the cloud. Halifax Mayor Mike Savage showed up to announce the winner.