Our Latest Report: Trends in B2B 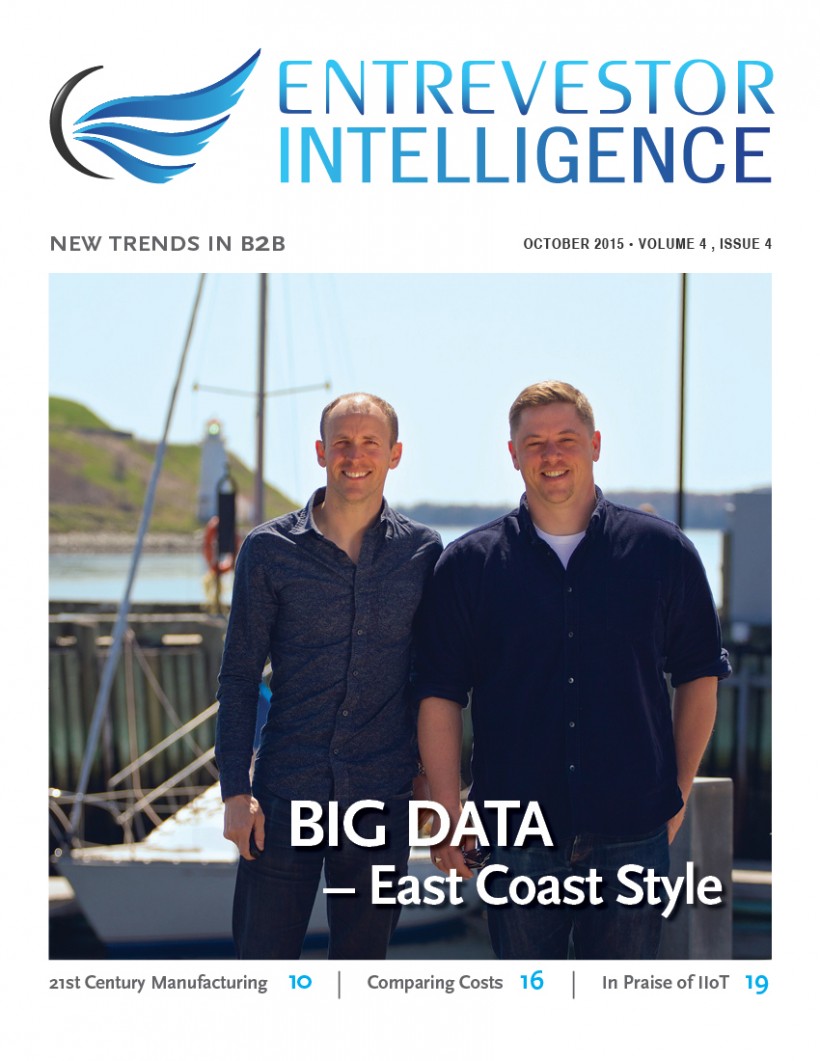 QRA has developed software that helps large manufacturers detect flaws in products early in the design stage. Kyriakidis said the technology will prove invaluable to the Internet of Things, in which machines communicate with one another and respond in real time.

“In the not too distant future, the Internet of Things is going to be a big deal,” said Kyriakidis in an interview.

“But I don’t think they realize the problem that they’re going to have. People are talking about standards, but there’ll still be a world of hurt when they start connecting all these devices because they will have the mother of all integration problems.”

QRA is just one of the Atlantic Canadian startups capitalizing on growing trends in industrial technology, including data analytics or robotics. Grouped together as a single sector, we get a cluster of some of the most exciting startups in the region.

This week in Halifax, specialists in these applications will gather for the Big Data for Productivity Congress, a conference on the potential of data analytics.

Entrevestor is marking the conference by releasing the fourth Entrevestor Intelligence report of the year, examining trends in business-to-business enterprise.

There’s a slight paradox in all this given the industrial sector in Atlantic Canada is wafer thin compared with larger jurisdictions. So why is the harvest so bountiful?

The reasons lie in the ecosystem for data analytics, the research conducted at educational institutions, the quality of university research and the increasing ambition among startups in the region.

For the last few years, there have been concerted efforts to make Atlantic Canada a centre for excellence in Big Data, the description coined by the leader in the movement, Geoff Flood, CEO of the tech consultancy T4G and the prime mover of the first Big Data Congress in 2013.

And the global accounting and businesses services consultancy EY has established its Canadian Centre for Advanced Analytics in Halifax. It comprises a team of about 30 specialized advisory professionals who work with major clients across Canada and around the world. EY is working to examine the data they have and find ways to use it to cut costs or improve performance.

Steven Maynard, a partner and EY Canada analytics leader based in Halifax, said the year-old team will grow as more clients realize the benefits of understanding their data and using it to make decisions.

“This isn’t the future we’re talking about, this is actually underway,” said Maynard. “But yes, there is a lot of untapped potential that companies can act on.”

Some major corporations are also getting more interested in using data to improve their bottom line, even partnering with the region’s startups to do so. The global food giant McCain Foods has become the first customer of two promising New Brunswick companies that analyze data. Resson Aerospace of Fredericton has developed software that can analyze a range of data gathered on farms to improve crop yields. And Moncton-based Fiddlehead Technology, founded by tech veterans David Baxter and Shawn Carver, helps large food producers better predict demand so they make neither too much nor too little food.

These are just a handful of the Atlantic Canadian startups that are developing products that analyze data for corporate users.

Some are aiding small business. Brownie Points of St. John’s, which attended the FounderFuel accelerator in Montreal, has developed reward cards for retail businesses that help the owners monitor their traffic and attract customers. Expanding aggressively in the U.S., Hotspot Merchant Solutions of Fredericton lets shoppers in downtown locations pay for parking on their payphones, but it also helps local merchants monitor customer traffic and advertise with clients.

And of course others are for enterprise customers, such as Analyze Re, a Halifax company that has devised risk analytics software for the reinsurance industry.

Another Halifax company, Swell Advantage, is now a business-to-consumer company but plans to develop an enterprise product for maritime industries. The first iteration, now available on Apple’s App Store, provides recreational sailors with a social network and navigation tools. The next phase, to be tested soon, will use sensors in smart phones to collect data on the boats’ environment and surroundings. The longer term strategy is to analyze the data to develop a product for nautical industries.

“The strategy is to be B2C at the start,” said CEO Iaian Archibald. “What comes from all of that is the data we’re pulling in. We can develop datasets with that from which we can build products for industry, government and academia.”

Of course, analyzing data is only part of the story on industry-focused startups. There are also the companies involved in other facets of the segment, including advanced manufacturing and the Industrial Internet of Things, or IIot.

RtTech Software, exemplifies the progress being made in IIoT in the region. Its products are RtEMIS, which can pinpoint when and where part of a system is using excess energy; and RtDUET, which allows companies to examine specific processes to find the cause of downtime and poor utilization issues.

It is just one of the IIot companies making waves in New Brunswick.  Others include Fredericton-based Eigen Innovation. Eigen’s CTO Scott Everett has developed algorithms to automate manufacturing processes with the food processing industry as its first target market. The product uses thermal cameras to make sure food is processed as thoroughly and efficiently as possible.

Another New Brunswick company finding traction with customers is Shift Energy of Saint John, which offers automated environmental controls to large complexes with a range of levels and spaces. Its customers include the Rogers Arena, the home of the Vancouver Canucks.

And as we mentioned earlier, Halifax’s QRA believes the development of the IIoT industry will be a key component in its growth.

As an example, CEO Kyriakidis cited the case of self-driving automobiles, currently a hot topic of conversation. Though some companies are discussing how close these cars are to being rolled out, Kyriakidis noted that the data demands of these vehicles are far more onerous than most people understand. For example, Atlantic Monthly has reported the Google Car operates so well in Mountain View, Calif., because the car has been pre-loaded with a very precise digitization of that city, right down to the height of the curbs. With its current technology, it wouldn’t be assured the same flawless performance in other locations.

“They’re going to get behavior you can’t predict with current systems,” said Kyriakidis. “They’re seeing it in aerospace right now and they’re going to see it in IIoT.”