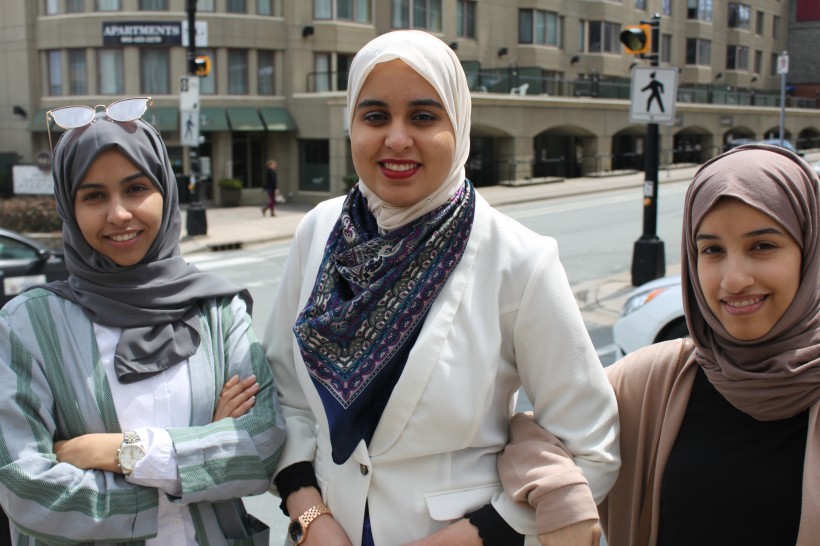 A team of three Dalhousie University neuroscience students is planning to conduct clinical trials in Saudi Arabia for the device they’ve built in a robotics course at the university.

Hayam Mahmoud-Ahmed, Manar Alamri and Batlah Alnemer completed Dal’s Creator Series, an entrepreneurship program for students to design and build hardware. The three women have built a sleeve wired with electrodes to help victims of strokes regain motor skills in their arms.

“Some electrodes will detect muscle activity, and the other ones will administer electrical stimulation,” said Mahmoud-Ahmed.

By harnessing electrical muscle stimulation (EMS) and electromyography (EMG) technology, the team hopes to build a finished prototype for stroke rehab by the end of the summer.

Alnemer said this project is very close to her heart. She watched her own father suffer from two strokes and, for years, saw his struggle to regain motor function in his hands.

Though they call their product Saied, which translates to ‘help’ in Arabic, the women aren’t set on a business name yet. But they plan to incorporate into a business this month and start clinical trials in Saudi Arabia in December.

“There is a lot more red tape here. Even trying to get patients from physiotherapists is hard,” said Mahmoud-Ahmed.

Alamri and Alnemer are both natives to Saudi Arabia and plan to travel back home to test the product with physiotherapists and occupational therapists, with whom Alamri has leveraged personal connections.

Through the Creator Series, the team received initial funding of $1000 to start the project then an additional $1500 at the end of Dal’s RADIANT (Rehabilitative and Diagnostic Innovation in Applied NeuroTechnology) program, which is where the group came together four months ago.

At the end of the program, each group of students presented their products to the class, the Saied team ended up winning for ‘most outstanding pitch’ and will have their names engraved on a trophy.

The women were also quick to add that they received an A+ for their final grade in the course.

Their prototype is still very rudimentary in its design, so the team is looking to bring on an electrical engineer this summer to help hone what they already have built in school.

"With the stroke patients we’ve interviewed, we found that they don’t want the world to know,” said Mahmoud-Ahmed. “We want to have a very sleek design and have all summer to mess around with the prototype.”

In a time when so many people in the community are encouraging women in tech entrepreneurship, it’s worth noting that the Creator Series at Dal was led by two women, Mary Kilfoil and Cat Adalay, and at the demo day two weeks ago more than 70 per cent of the presenters were female.