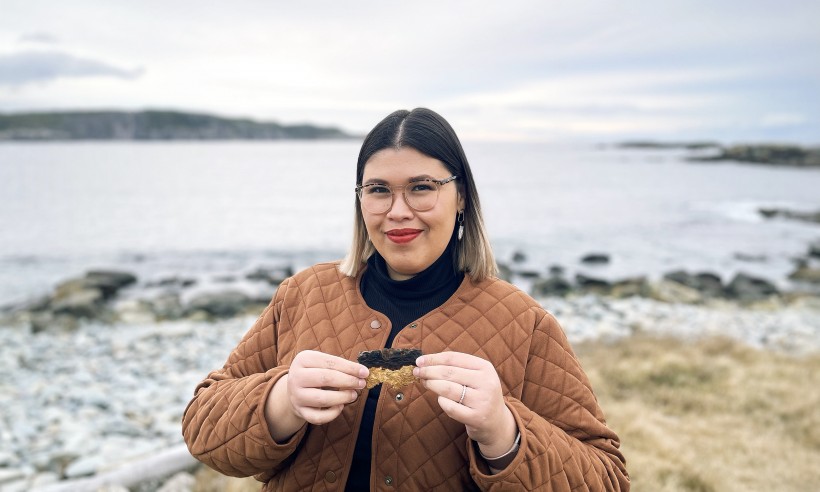 When they emerged from the program eight weeks later, they had pivoted to an entirely new business, and on Friday, their revised plan helped them win $55,000 of cash and in-kind services from the BioInnovation Challenge accelerator and startup competition.

“We realized we were much more passionate about alternative materials,” said Lipp in an interview. “We realized we didn’t need to establish ourselves in a different area before we could actually pursue what we love.”

Lipp and Gillis already owned a mushroom-cultivation business, Gillis Naturals, that they founded in 2019. Lipp said manufacturing mycelium leather was their long-term goal even before they started Evolution, but they expected that goal to come far in the future. The advice they received during the accelerator changed that.

“We thought that before we could do our big dreams, we had to establish ourselves on a smaller level first, which I'm learning is a common thread with entrepreneurs — especially women entrepreneurs,” Lipp said. “You know, there's a lot of imposter syndrome there. But once we realized that life's too short to not do what you're passionate about… we switched gears and got right into it.”

The duo entered Evolution in July and decided to pivot five weeks into the program, leaving them just two and a half weeks to conduct customer discovery and prepare a pitch deck for the climactic Pitch & Pick competition, where they became finalists.

Now, less than three months later, they have created a prototype sample two inches across.

“It was very, very tiny,” said Lipp. “But for us, it was a triumph, because it is very durable, very flexible, and it has a really nice surface texture.”

She and Gillis are in the process of fine-tuning their cultivation process for the mycelium, experimenting with different strains of oyster mushroom. They are also tweaking humidity and airflow in the mushrooms’ growing environment to encourage them to develop more extensive mycelium networks, rather than the fruiting bodies for which mushrooms are generally recognized.

Once Lipp and Gillis have dialled-in the mycelium cultivation process, they will manufacture the leather by cleaning the mycelium and using “a combination of compounds to crosslink layers and to stabilize the material, so it it kind of solidifies into a mat.”

Lipp and Gillies beat out two other finalists, Bactana Canada and Au Naturel Solutions, both from Prince Edward Island.

Bactana is developing technology  that will use DNA sequencing to improve the productivity of farm animals. The process includes a feed additive for poultry and possibly swine. The company is based in Connecticut, with a Canadian subsidiary.

And Au Naturel is building a breast prosthesis made from natural and environmentally friendly materials. Unlike conventional prosthetics, it will not require a specialized bra.

MycoFutures’ prize takes the form of $25,000 of seed funding and a package of advisory services that BioNova said in a press release is worth more than $30,000.

Lipp said she and Gillis plan to use some of the money to pay for laboratory space in St. John’s to continue their R&D.

“Our short-term goals are to get a lab set up, whether it's a shared one, or if we're able to put (a dedicated) one together, so that we can really work full-time on perfecting our methods and techniques and begin scaling,” she said.

“We'd love to start some research projects and get some grad students. We are kind of a convergence of a few domains, so we do need a few different areas of expertise, to just give us a bit of feedback on what we know and what we can do.”

With the increased visibility that has come with being finalists at Pitch & Pick and winning the BioInnovation Challenge, Lipp said they plan to raise capital in the coming months. They are also pursuing funding from research nonprofit Mitacs.

Here’s a look at the other companies that competed:

Axtion is developing a mobility aid that resembles a conventional walker, but with an elevating seat that deploys to prevent falls and help users recover if they lose their balance.

Remidose manufactures equipment to deliver measured doses of cannabis oil. So far, the company offers an inhaler, an oral spray and a topical aerosol device.