Sobeys is now carrying the Saint John company's frozen tea across the country. 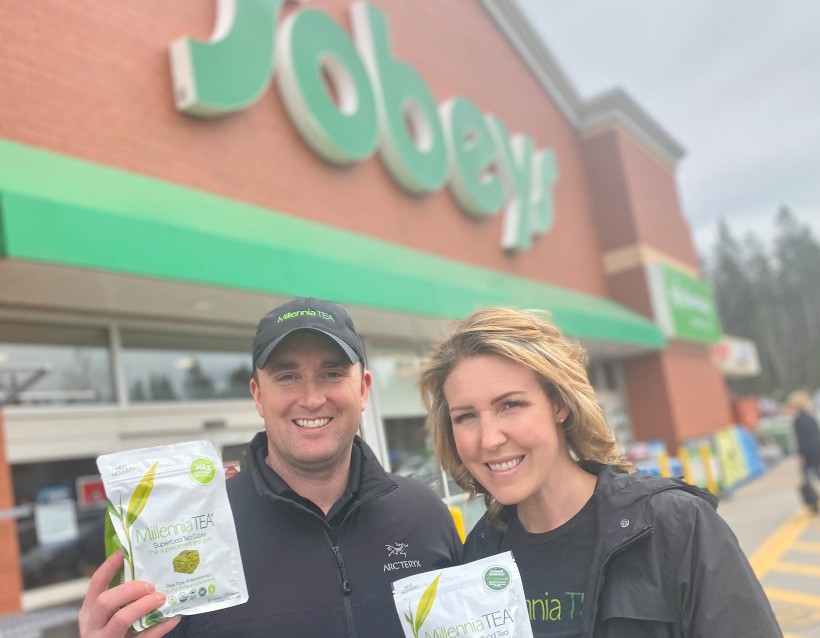 Rory and Tracy Bell outside a Sobeys outlet.

Millennia Tea has expanded its relationship with Sobeys so its frozen tea product, which is rich in antioxidants, is now available in the supermarket chain’s outlets across the country.

The Saint John company began selling in 10 Sobeys stores in New Brunswick last year, as part of the supermarket chain’s Support Local program. The product proved so popular that it is now available at Sobeys and Safeway locations across the country. If you include the health food stores that were once the company’s staple, Millennia Tea is now available at almost 500 locations.

Millennia Tea was founded in 2016 by CEO Tracy Bell and her husband Rory Bell, who developed a special process of washing and flash-freezing fresh-picked tea leaves, instead of cooking them. The result is tea that has five times as many antioxidants as normal green tea and none of the bitterness.

“In 2020, our revenues were up a little more than 200 percent over 2019,” said Tracy Bell in an email Monday. “And in 2021, based on current revenue, upcoming listings and month-over-month sales velocity increases in our current retailers, we’re forecasting a 1,000 percent increase over 2020.”

As happened with so many startups, Millennia Tea began 2020 with strong sales, then suffered a setback when the pandemic broke out.  Fewer customers were visiting health food shops, and those that did were reluctant to bring new products into their homes. The Bells needed to rethink their strategy. Fortunately, Millennia Tea had recently been accepted into Sobeys’ Local Support program, which allows food providers to sell their products in outlets near their headquarters.

The product, found in the freezer section of each outlet, sold strongly enough that by the end of the summer it was available in 30 Sobeys outlets in New Brunswick. The Bells asked Sobeys if the chain would like to carry Millennia Tea across the country. Sobeys said yes.

As well as its increased reach through the Sobeys deal, Bell said the company has also had success in selling through health food stores. The company has been running education campaigns and providing shops with samples and promotional materials.

“Our marketing and relationship-building efforts worked, and by the fall we were seeing higher-than-ever sales numbers at our health food partners in Atlantic Canada,” said Bell. “Growth has been slower in markets where COVID outbreaks are high and restrictions are really still impacting the retailers, but still progressing.”

As it prepares to hire its sixth employee, Millennia Tea is expecting to continue growing this year. It raised an undisclosed round of funding early in 2020 from: Natural Products Canada; New York-based investment group SOSV, which operates the Food-X accelerator; and private investors. Now the company is planning to raise more capital later this year. The goal is to sell Millennia Tea in 1,000 Canadian stores by the end of the year, and enter the U.S. market in 2022.

Bell said 2021 “is our year to take Millennia Tea from a relatively unknown company outside the region, to a household name, fuelling the wellness of families from coast to coast.”