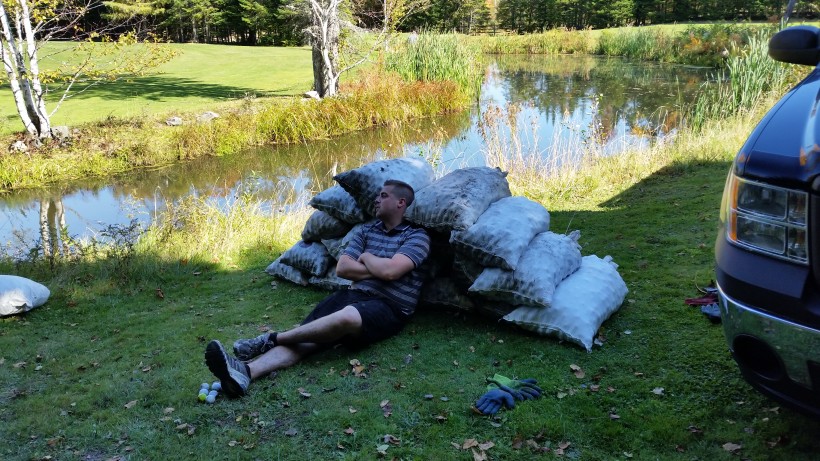 The greatest thing about Matt’s Got Balls is obviously the company’s name, but a close second may be its margins.

The Fredericton startupis the brainchild of Matt Vance, a University of New Brunswick engineering student with a blazing passion for golf. He has teamed up with his father, Kevin, and fellow student Josh Ogden to produce a business that retrieves golf balls from golf course water hazards and sell them online.

“What we’re developing now is an e-commerce solution so if you’ve got golf balls, we’ll help you get the best price for them,” Ogden said during an interview in Fredericton.

Kevin Vance works with metal, and he and his son are on their fifth prototype of a machine that retrieves balls from water while the operator remains on dry land. That’s important because most retrieval outfits involve scuba divers, but the world’s water hazards can contain challenges to humans ranging from toxins to alligators.

Matt’s Got Balls has used its contraption at 18 golf courses around the Maritimes and is aiming to raise that to 45 this summer. But it is also developing a plan to sell the machine to other operators and work with them to sell balls at maximum profit on its e-commerce platform.

The eye-popping thing about the business plan is the margins they make on the sales of balls. Matt Vance said that on average they sell a golf ball at 500 per cent of the retrieval costs, and the margin can be high as 1,700 per cent.

Of course, golfers are particular about their equipment so the company only sells good balls on its site, and there is a rating system to ensure each vendor has been honest about the quality of the product. Vendors who routinely get bad ratings, or do not respect the rules of the golf courses they work with, will be denied access to the site.

Matt’s Got Balls has signed a deal with the national discount chain Giant Tiger, which will sell the lesser brands that are fished out of the ponds.

The Vances are working on the sixth iteration of the device, and the company is preparing to sell the machines to people interested in getting into the ball-retrieval business and selling on their site. It is also planning to give two per cent of its profits each year to the Canadian Cancer Society and (in keeping with the company name) to Testicular Cancer Canada.

As you can probably tell, this is a team of entrepreneurs bursting with personality. Matt Vance, pictured above, is a stocky, jockish character and born raconteur, whereas Ogden is more polished, a marketing type. They have the rare ability to entertain a listener with the story of how the business developed, from Vance’s days on the golf course as a teenager to the encouragement they received from a UNB professor.

When asked if they need funding, Ogden and Matt Vance were non-committal. They’ve thought about seeking about $250,000 in investment, but only from funders who can help them grow their business. In the meantime, they’re happy to sell golf balls at healthy margins.