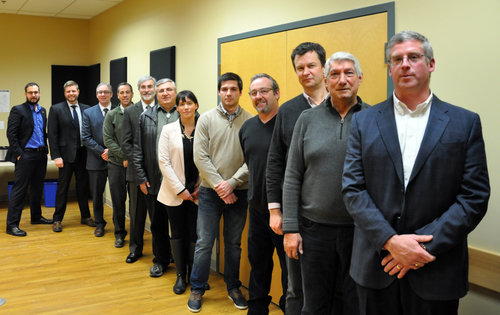 Members of the Aboriginal Business Accelerator

A new accelerator for aboriginal entrepreneurs has been established in New Brunswick, and it’s already witnessing great progress from the five teams enrolled in it.

Trevor Bernard: a CTO with 3 Exits

This year’s accelerator focuses on shipbuilding, aerospace and defence. The first cohort consists of five entrepreneurs: two in tech, two in manufacturing and one in clean tech.

One entrepreneur wants to create an app that tells disabled people how to better access buildings; one invented a better version of a river turbine in order to commercialize that technology; one wants to digitize user manuals; and one wants to improve machining with tech solutions, like big data.

The entrepreneurs in the accelerator will present at the JEDI plenary and at the New Brunswick Aerospace and Defence Association’s showcase in Moncton to publicize their work.

“We wanted to take an advantage of a new opportunity to bring some bright entrepreneurs together with high potential and put them through a customized accelerator program,” Taylor said.

New Brunswick hasn’t seen many Aboriginal entrepreneurs. Trevor Bernard broke this pattern when he was involved in three exits from Chalk Media (acquired by Research in Motion), Radian6 (sold to Salesforce for $326 million in 2011) and UserEvents (sold to LiveOps in California in 2014).

Bernard didn’t create Chalk Media or Radian6, but he did cofound and was Chief Technology Officer at UserEvents, which analyzes company data to determine when a customer runs into problems on a corporate website or other channel. UserEvents then notifies the company’s call centre to sort out the problem.

Bernard mentors an IT company in JEDI’s accelerator.

“There’s a lot of great accelerator programs out there that do amazing things, but the opportunity has presented itself to do more with aboriginal entrepreneurs,” Taylor said.

Taylor said JEDI and all their sponsors hope that the businesses can grow in the accelerator so that they can start hiring New Brunswickers.

“The more companies that are growing like this and hiring people, the more jobs are secure and the more of a positive economic impact the province,” he said.