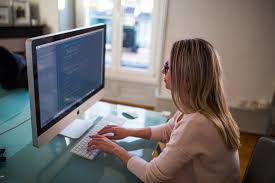 As part of Dalhousie University’s bicentennial celebration in 2018, the Faculty of Computer Science is launching a campaign to double the percentage of female students enrolling in the next academic year.

Like universities around the world, Dal’s Computer Science faculty has a difficult time attracting female students. Some 20 percent of the class entering the faculty last month are female, and that’s an improvement on the levels of past years.

The faculty has set a target of raising the proportion of women entering computer science in the 2018-19 academic year to 40 percent. To achieve that goal, the faculty is now reaching out to industry partners to provide about 60 scholarships for female computer science frosh next year. These scholarships would include financial support, mentorship from female execs in tech industries, and coop placements.

“If we make that shift in one year, then we hope we can keep the balance higher organically in subsequent years because there will be role models within the faculty,” said Becca Rawcliffe, the Alumni and Communications Officer at the Faculty of Computer Science.

Dal is addressing a huge societal problem – not just in universities, but also in the workforce. According to US News & World Report, females accounted for just 18 percent of computer science students in the U.S. in 2014. That low number restricts the number of women entering ICT businesses. And that means too few women benefit from the technology sector, which is one of the great employment and wealth creators of our era. It also leads to problems of sexism within the tech community, which have been well reported lately.

Rawcliffe said industry overall feels the need to improve workforce diversity, so companies (including tech companies) are striving for a great gender balance in their staff. That’s why the faculty is getting a good reception, she said, as it contacts private businesses and asks them to provide scholarships for female Computer Science frosh next year.

Private businesses interested in discussing the possibility of providing a scholarship are asked to contact Development Officer Adrienne Power at Adrienne.Power@dal.ca.

Rawcliffe also said the faculty is changing curriculum somewhat to include an elective on the history of technology, so students gain a greater appreciation of how IT fits into the advancement of human society. Dalhousie is trying to eradicate the misconception that only male geeks go into computer science and gain better rounded group of students.

“The myths are that you have to be really into coding before you come here, which you don’t,” she said. “There are these myths that it’s an isolated discipline and you’re sitting behind your computer coding all day. But our program is very collaborative. And people can be interested in anything -- you can be interested in art, or in healthcare. Our students go on to become many things, doctors, lawyers, many professions.”