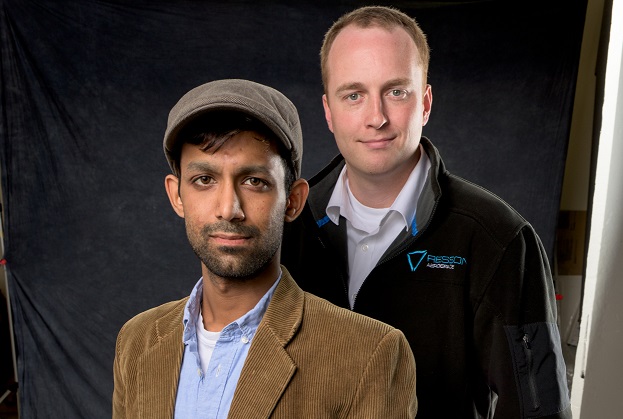 There’s an industrial segment in which Atlantic Canada excels. The companies in this space have raised more than $30 million in 2016 alone. They are establishing offices in Silicon Valley. They’re gaining worldwide clientele.

The segment is the intersection between digital technologies and life sciences. I’m not sure that even is a segment, but maybe we should make it one and start to play it up a bit.

Why am I discussing such an ill-defined sector? Several influential players in the startup community believe the region has to choose a segment or two to excel in and develop the ecosystem to make those sectors even better. (Not surprisingly, it’s usually a sector that these individuals are working in.) There’s talk of ocean technology, cybersecurity, drone technology and other areas.

But the place where Atlantic Canada is really making waves is digital technologies that work with biology.

Consider what a few exemplars have been up to this year:

- Resson, the Fredericton company that analyzes data from farms, raised US$11 million in a funding round led by Monsanto Growth Ventures and other investors to expand its team and open a Silicon Valley office.
- Kinduct Technologies of Halifax, whose platform accesses 500 sources of data on the human body to aid sports medicine practitioners, raised US$9 million in a round led by Intel Capital. That money will help the company increase its global network and increase its staff in Halifax.
- St. John’s-based Sequence Bio, which is building a databank on the genetic data of 100,000 Newfoundlanders, received a US$3 million funding round led by the Silicon Valley venture capital firm Data Collective. The lead investor called Sequence’s work in health data “a globally significant opportunity.”
- Halifax-based sports genetics company Athletigen Technologies raised US$1.55 million in a round led by Exponential Partners, a Newport Beach, Calif.-based venture capital fund that specializes in health and human performance innovations. The money helped to fund the growth of its flagship product, the Athletigen Performance Platform.

Add ‘em up and you’ve got the equivalent of more than C$32 million in direct venture capital investment coming into Atlantic Canadian companies, companies that are growing revenue and staff at a furious rate. There probably isn’t a more dynamic segment in the regional startup community.

The problem with championing such a group is identifying it, not to mention naming it. These are all digital companies, developing software and/or hardware. But they are making advances in applying technology to biology, whether it’s human medicine or in other disciplines like agriculture or environmental sciences. It’s not easy to name such a group, but let’s go with “digital life sciences.”

Each of the four Atlantic Provinces are represented in this segment, but none dominates the space. Though there are no P.E.I. companies mentioned above, the Island does boast companies like Vitrak Systems, which is commercializing a pressure-sensitive floor tile system for medical research and rehabilitation. The company has said it is raising a significant funding round.

So this is a segment that spans all provinces and lies between the IT and life sciences segment. That means there is both an opportunity and a problem. The problem is that most of the organizations that promote innovation represent specific provinces, especially in biosciences. And there is too little overlap in organizations promoting IT and life sciences. It’s difficult to think of a single entity that could champion digital life sciences across the region.

Here’s one idea: These companies themselves should form an association. They are now big enough that they could all contribute to it financially. And they could probably attract financing and other resources from the organizations that are at the periphery of what they do – like the provincial life sciences organizations or Propel ICT. Maybe it could just be a division of an existing organization.

What would such an organization do? First it could promote that this segment in and outside Atlantic Canada.

Then it should assess the resources available across the region that could benefit these companies. The financial resources are fairly obvious. The more important resources are human and physical. There are lab facilities, specialists, researchers and mentors scattered across the region, and entrepreneurs in Province A don’t always understand what’s available in Province B. And this organization would broaden the network of mentors greatly. Each of these companies is highly specialized, requiring both IT and biological expertise, and they would benefit from a broader network of local champions.

Finally, with an association they could market themselves together in Silicon Valley. Several of these companies now have offices in the Bay Area. Resson and Kinduct are both represented there, and Halifax’s 4deep Inwater Imaging, which makes electronic, underwater microscopes, shares an R&D facility with its Chinese partner Guangzhou Bosma Corp. These companies should be working with each other in the Bay area as well as at home.

The first problem with this group is defining it. But the fact that just four companies in the space raised $32 million of venture capital, mainly from Silicon Valley, with little government contribution, should make us sit up and take notice. There’s an opportunity here and it’s worth a discussion, if nothing else.