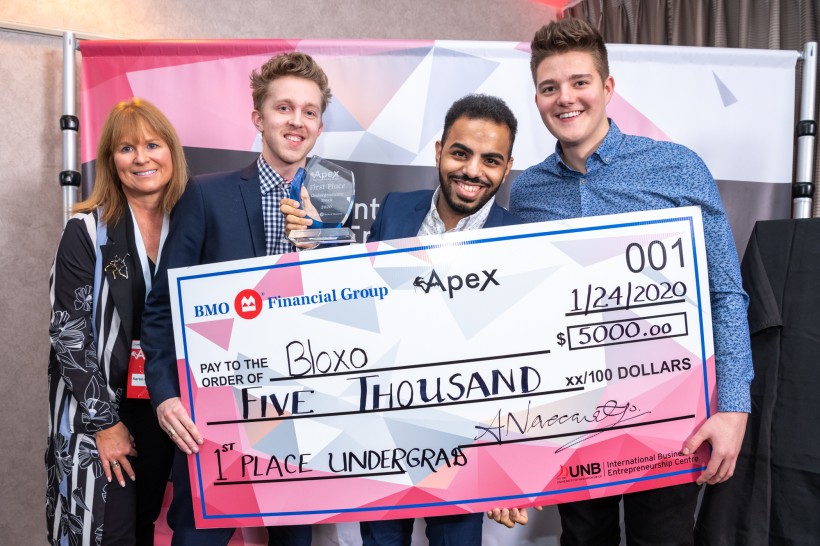 The Bloxo team at the Apex competition in New Brunswick in January.

Five companies competed in the event for votes from an audience of 60 to 70 spectators. Normally held in person at the university’s Enterprise Forum innovation hub, the event went virtual because of the pandemic.

Bloxo’s latest iteration will allow users to register for and participate in online fitness activities, such as yoga and Pilates. The current model is a slight restructuring of the previous version, which focused on in-person classes and public recreation venues.

For now, the old platform has been shelved while Alali and his team focus on beta-testing Bloxo Virtual, despite the original having only launched on March 4.

Like the in-person offering, fitness instructors can advertise classes, for which they may charge an entry fee. The details of the revenue model are still being decided, but Alali said Bloxo may take a cut of the fees charged by the event leaders. For now, the app is free.

The MIT competition, meanwhile, offered the chance for the company to present its product offering to industry peers and luminaries, according to Alali.

“For us it’s about the exposure, and that people attend and listen to your pitch and learn about Bloxo,” he said. “For us, that’s what matters.”

Chief Financial Officer Jennifer MacHattie said that in addition to the live viewers, events from previous years have usually been watched about 400 or 500 times on the MIT website, suggesting that similar numbers are likely for 2020.

Startup Spotlight was to be the second in a series of public events that Bloxo was slated to participate in this year. The first was the SaaStr conference in California – the largest conference in the world for companies that sell software-as-a-service products – but COVID-19 forced organizers to cancel the gathering.

Toronto’s Collision Conference, however, will go ahead as an online event, now billed as Collision From Home. And Alali will be one of the presenters. The company previously placed in the winners' circle at the Apex Business Plan Competition in Fredericton and the Volta Cohort pitching event in Halifax.

Bloxo’s founders also continue to eye a funding round, although the timeline has been pushed back. They initially had expected to begin the raise this summer, but as the economic crisis continues to unfold, they now believe a fall timeline is more realistic.

“It depends on the success of Virtual,” said MacHattie. “Once we get past some of these upcoming steps, we can reevaluate things like burn rate, as well.”

Bloxo so-far employees eight people, some of whom work part-time and some full-time. Another new hire may be on the horizon in the coming weeks, but MacHattie cautioned that the final decision has not yet been made.

“Kind of what you say is, ‘You’re not hiring until you’re hiring everything,’” she said, referring to the need to time hiring to coincide with an overall scaling up of the business.