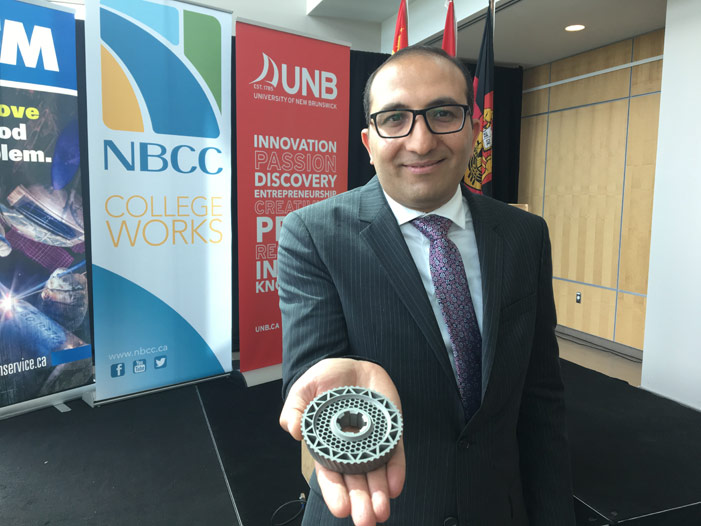 The Atlantic Canada Opportunities Agency and New Brunswick Innovation Foundation are providing a total of $5.5 million in funding to the Marine Additive Manufacturing Centre of Excellence at the University of New Brunswick.

The two agencies said in a statement Wednesday that the funding would be used to support both the R&D expertise and pay for equipment at the centre, which is known as the MAMCE.

“Additive manufacturing is poised to fundamentally change the way things are made,” said Saint John-Rothesay MP Wayne Long, who represented the federal government at a ceremony in Fredericton. “With this support . . . UNB’s Marine Additive Centre of Excellence is well positioned to further drive innovation and cultivate strategic partnerships with manufacturers in the marine industry, while equipping them for global success.”

ACOA, the federal government’s East Coast economic development agency, is providing a grant of $5 million through its Atlantic Innovation Fund, while NBIF is contributing $450,000.  Other partners that have previously announced support to this project at MAMCE include Mitacs ($616,000), Irving Shipbuilding Inc. ($750,000), and Lockheed Martin Canada ($1.6 million).

When the university announced the centre in May, it said it would be the first in Canada to use 3D metal printing as a method for manufacturing certified, custom parts for the marine sector.  Its mission is to ensure the adoption of this leading-edge technology in the marine sector in Canada by developing new methods, procedures, and effective training programs.

Headed by Professor Mohsen Mohammadi, the initiative will enable New Brunswick and Atlantic Canada to develop a core expertise in this emerging technology and help create the foundation for the next generation of manufacturing.  By working closely together, the founding partners will ensure that this program has the best chance of succeeding long term in a globally competitive marketplace.

MAMCE will purchase a next-generation 3D printer to assist with its services to industry. The goal is to accelerate the adoption of advanced manufacturing techniques through additive technologies, and address issues encountered in marine and other sectors such as corrosion, fatigue, and harsh temperatures.

“As an innovation capacity-building project, the MAMCE initiative aligns with our mandate and will bring infrastructure, expertise and knowhow to the Atlantic region,” said NBIF Chair Cathy Simpson in a statement. “This project and the work of Dr. Mohammadi is one of the most exciting initiatives we’ve seen in recent years and we’ve been proud to support him through this and other research projects. This is sure to attract major corporations to the province and we anticipate a significant impact from the Atlantic Canadian manufacturing companies that choose to adopt the technology.”